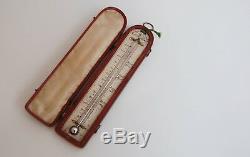 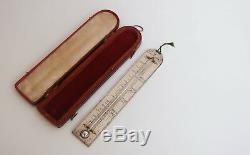 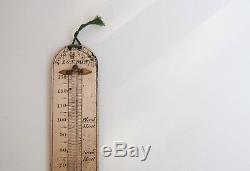 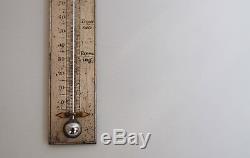 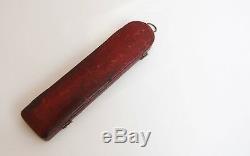 For sale, a William IV period Morocco leather cased travelling thermometer by Troughton & Simms. This super example is unusual as the arched top scale plate is comprised of silvered brass rather than ivory or bone which was the material of choice for most that were produced during the period. The Fahrenheit scale reads from 0 130 degrees and has indications for Blood heat, Summer heat, Temperate and Freezing. It is engraved to the prestigious maker of Troughton & Simms London to the top of the scale and has two holes in the top to allow for hanging.

The case is in super condition being covered with morocco leather to the exterior and has a white silk lining to the interior lid and a red velvet covering to the base. The lid is secured by means of two hook and eye catches. Arguably, the most famous of British scientific instrument making firms from the period, Troughton & Simms was created in 1826 by a merger with the business of William Simms and this company continued to trade until just after the Great War. In 1922 it merged with T Cooke & Sons to become, Cooke Troughton & Simms.

The company still exists today and now trades as Cooke Optics Limited with a focus on cinematography lenses. Prior to their merger, Edward Troughton was responsible for considerably expanding the Troughton familys reputation for quality (the dynasty had begun in the 1750s).

He was apprenticed to his brother John in 1770 and later formed a partnership with him named J&E Troughton. Following Johns retirement in 1804, he maintained the business in his own right and was elected a Fellow of The Royal Society in 1810. He was considered a peer of the great Jesse Ramsden, responsible for numerous developments in surveying and navigational instruments. William Simms was born in Birmingham but moved with his family to London where his father was employed in making marine compasses.

He was apprenticed to a goldsmith, William Penstone but turned over to his father (also William) two years before completion. In 1815, he emerged and went into business as a Freeman of the Goldsmiths Company of London. Soon after, he submitted his plans for an improved protractor to The Royal Society and was supported by Thomas Jones, the famous instrument maker from Charing Cross and originally one of Jesse Ramsdens workmen. His work and ideas on the development of dividing engines brought him into close contact with Edward Troughton as Simms, re-divided an engine that had been made by Troughton some years earlier and required an overhaul but the relationship with Troughton is considered to have been formed after working together on a commission for Sir James South for the East India Company.

Jason Clarke Antiques are happy to discuss carriage, condition or for any other queries, alternatively, you can also message me and I will endeavour to come back to you as soon as possible. I have a number of beautiful antiques for sale, so please feel free to browse my other items. The item "WILLIAM IV MOROCCO LEATHER CASED TRAVELLING THERMOMETER BY TROUGHTON & SIMMS LON" is in sale since Friday, October 5, 2018. This item is in the category "Antiques\Science/Medicine\Scientific Instruments".