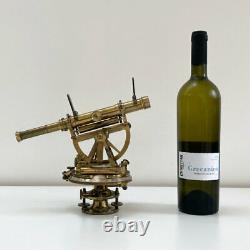 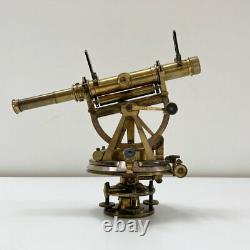 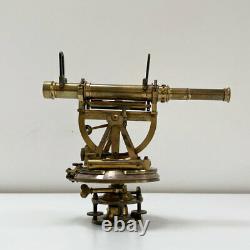 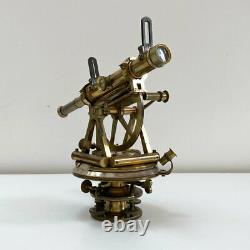 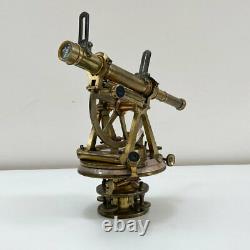 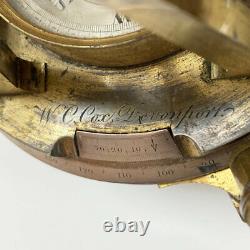 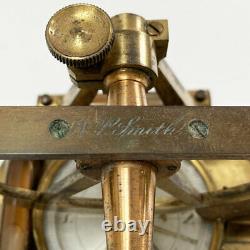 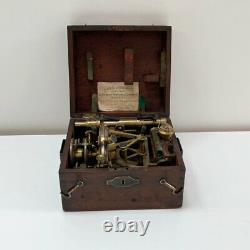 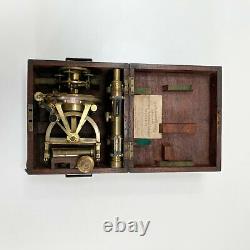 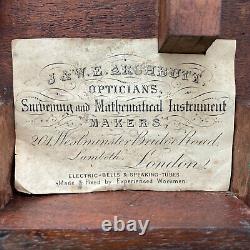 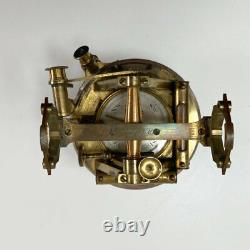 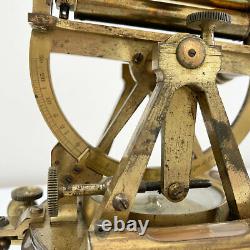 For sale a rare cased Early Nineteenth Century miniature altazimuth theodolite by WC Cox of Devonport. This rare example is comprised of a horizontal four and a half inch divided circle which can be hand operated for coarse adjustment. Fine adjustment is achieved by a geared vernier which can be manoeuvred by means of a knurled brass knob at the top edge. The centre contains an expertly engraved and silvered compass with a brass catch to hold or release the movement and two sides of the outer edge are provided with a glass level housed in protective brass cases. Two brass A frame type struts either side of the compass provide support for the semi-circular divided arc which is again hand adjusted for coarse setting and then finely adjusted by a vernire attached to the A frame.

The arc is further completed with a 9.5 inch telescope with attached glass level below, again housed in a protective brass sleeve and hinged sights to the top. Below the horizontal base is attached a shaft for fixing to a tripod which includes four level adjustment screws, a locking nut and Vernier for fine adjustment. The cross bar for the telescope is also engraved with the owners name of WP Smith. A somewhat difficult surname to research but I suspect that it was owned by a Captain and later Lieutenant Colonel WP Smith of the Royal Artillery.

Cox's close affiliation with the military given his location in Devonport would allow for a reasonable attribution. This is of course purely an assumption.

The instrument is fitted within a robust fitted mahogany case with brass holders to the side for fitting a leather carrying strap. It also includes an antique brass plumb bob although it is too large to be an original accessory. The case also contains a further trade label to the Victorian London instrument makers, J & WE Archbutt of Lambeth London which has been shaped to work with the interior of the original case fittings.

Of similar form to those produced by all of the London instrument makers of the period, this miniature example is a very rare and early example by a very well respected regional maker of the period. The Cox family were trading as opticians and scientific instrument makers from the beginning of the nineteenth century, having an establishment date of 1806. Records suggest that a William Cox was trading at this period and later in 1822, a William Charles Cox (who may be one in the same or a son) had premises across Fore Street and Southside Street until 1857. His advertisements from this period, announce him as an "optical and nautical instrument maker".

Taking advantage of the necessary requirements of a naval station and its inhabitants, Cox was an agent to Robert Brettell Bate for admiralty charts and agent to both John Roger Arnold and Edward John Dent (EJ Dent) as a supplier of their "admiralty chronometers". In addition, his instruments are often found with inscriptions suggesting that he was supplier to The Royal Western Yacht Club founded in 1827.

Coombes in Fore Street from 1890 indicate that the partnership with Cox had then been severed by either death or dissolution and I have seen later Admiralty presentation barometers (1894) which are solely marked to J. It is interesting to note that Coombes was advertising his business as having been established since 1806 but he was obviously using the Cox family's earlier trading dates prior to the partnership to promote the longevity of his business. Early records of the Coombes business are noticeably absent.

With the evidence to hand, it may be more sensible to question the establishment dates for the partnership of Cox & Coombes as Cox as a sole trader has established working dates up until 1857. Unless further evidence comes to light, my view is that the partnership is more likely to have existed from circa 1860 - 1890. Records for the succeeding Coombes business prove that the business was still active in the 1930's and was at some point between 1930 and 1950 formed into the partnership of Coombes and Jarvis. It is suggested that this firm was finally bought out by Dollond & Aitchison in the 1970's which itself was finally amalgamated into the Boots Optician brand. Jason Clarke Antiques are happy to discuss carriage, condition or for any other queries, alternatively, you can also message us and we will endeavour to come back to you as soon as possible.

This item is in the category "Collectables\Scientific Collectables\Engineering & Surveying". The seller is "jason750_1" and is located in this country: GB. This item can be shipped to United Kingdom.