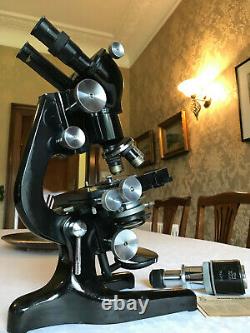 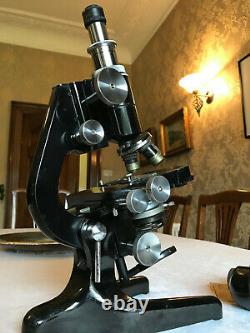 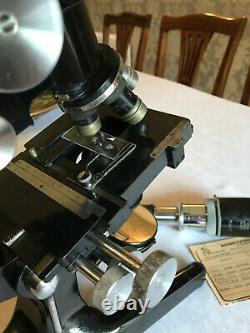 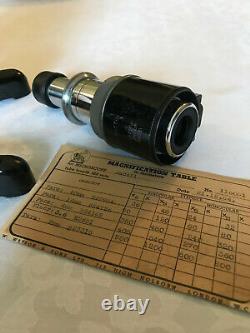 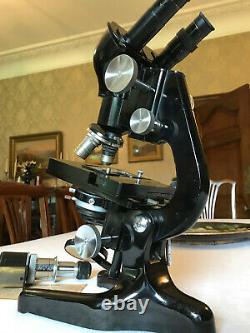 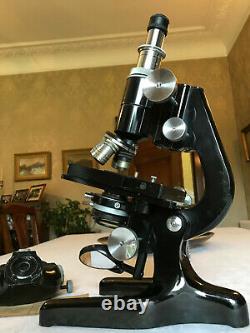 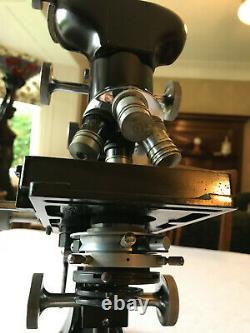 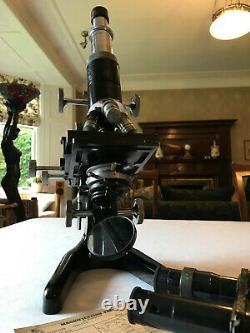 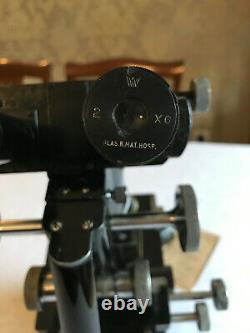 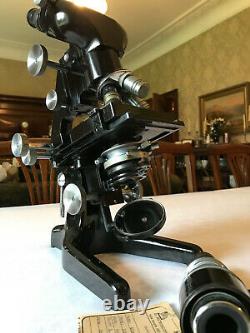 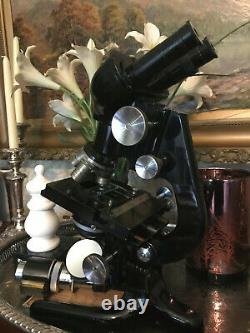 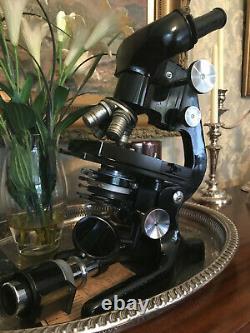 Here is a highly collectable example of an iconic technical microscope in astonishingly good original condition - a retro Watson Bactil monocular and binocular model from the early-1950s. It's ex-NHS and has a marking on one of the Watson eyepieces indicting that it was originally used in the Glasgow Royal Maternity Hospital which was located in Rottenrow in the Townhead district of the city centre. The hospital was often just referred to as the "Rottenrow".

The hospital moved to another site about 20 years ago; the Rottenrow site has since been demolished and that area occupied by the University of Strathclyde. The Watson Bactil is a large heavyweight instrument, the largest that Watson produced in this era. The earlier Bactil models like this one were produced with a black finish, whereas later Bactil 60 models (introduced in around 1960) were in an off-white finish, so this is example is a classic Bactil model in its neat black livery. To get a sense of the sheer scale of this model of microscope take a look at the size disparity between the objective lenses and the instrument itself, that gives you a good idea of the size and presence that the Bactil instrument commands, in both monocular and binocular modes.

This example is serial number 110490 which dates its manufacture to around the 1952 period. It's got a comprehensive technical configuration and a correct compliment of period objective lenses for the Bactil model offering a useful magnification capability. The construction is really solid with much use of heavy metals such as iron and brass. The black painted finish is in generally good condition with only a few areas showing chipping and some minor paint bubbling. The bright-work components are all nickel/chrome plated and have polished up really well.

This Watson Bactil has rack and pinion main and thumb-wheel fine focusing, both of which move smoothly with little obvious wear. This example is supplied with an original set of Watson 6x eyepieces - one of which is marked up Glasgow Royal Maternity Hospital - these therefore scale up to 9x magnification at the eyepieces taking into account the +1.5x provided by the binocular unit.

The monocular head bears a different Watson serial number which is 116051 and dates from 21 December 1954 and is confirmed by a Watson guarantee card that's present with the instrument. The two different serial numbers indicating, as so often happens in hospital laboratories, that the monocular head and main microscope frame have been mixed from two separate Bactil models at some point in the past. It's very easy to change between monocular and binocular configurations - the monocular unit is also fitted with a chrome draw-tube and is supplied with a high-power modern 10x eyepiece. The Bactil is a versatile instrument and just as capable in monocular configuration as it is in binocular. This example is fitted with a rotating Watson quadruple nose-piece which clicks into position positively as each objective is rotated to its viewing position and comes supplied with a range of progressive magnification period Watson objective lenses as follows.

The two-part adjustable stage-clip system for holding slides in place during viewing is present and is ideal for holding a slide in place while the x and y-axes are being moved around and if you're using inclined viewing. The y-axis adjuster also has a thumb-wheel located underneath that can act as a brake, so that the y-axis remains stationary during inclined viewing, resisting the pull of gravity. There's some evidence of wear to the black painted finish on the frame and stage surface but that's to be expected in view of this example's use over the years.

Below stage there is an Abbe-type Watson condenser with centering adjustment and fully working iris on a rack and pinion mount for vertical adjustment. There's also double swing-out filter holders below the condenser for adding coloured, opaque or dark-field filters. This example is fitted with an over-size double-sided plano-concave mirror for illumination which is on an adjustable arm and gimbal set-up, with good silvering to both sides. And last but not least of course, the Bactil's pièce de résistance which is the binocular eyepiece unit, it's adjustable for both focus and eyepiece separation via a right-sided thumb-wheel and comes with a set of Watson eyepieces detailed above. The paint finish on the binocular head has bubbled in places, with the paint in parts re-touched to match the original, but otherwise it's in pretty good condition optically.

There's also monocular hardware for this example, giving a monocular viewing option for those that prefer that set-up. All-in-all a really well presented and pretty well complete example of a retro Watson Bactil binocular model with its comprehensive technical set-up, period look. And decent cosmetic condition with just the right level of patination. This example will make a great usable addition to a collection as well as making a spectacular and imposing display piece or curio.

If you've been looking for a vintage Watson Bactil for a while, this mid-50s ex-NHS example definitely merits a really close look - don't miss this one. Please note that there is currently no storage case for this example.