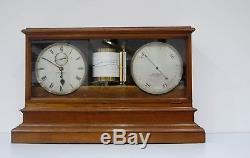 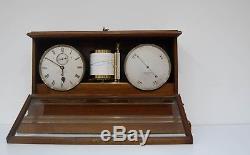 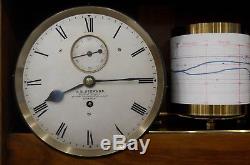 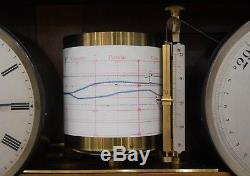 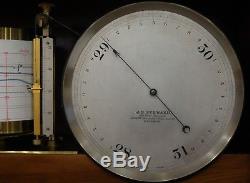 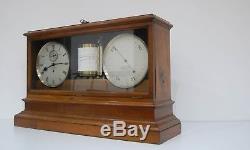 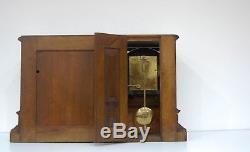 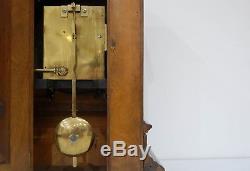 The central section contains a barograph type recording drum which rests upon a toothed gear wheel to the base and is rotated by a series of further gears which relate back to the clock movement. The aneroid barometer has a 7 silvered dial also engraved with the makers name. The scale measures 28 to 31 inches of barometric pressure and like the clock, the barometer also drives (by means of a fusee chain) the vertical movement of the nib up and down the scale according to the pressure changes on the barometer. The clock also regulates the horizontal movement of the nib which rotates its position every hour to allow it to make contact with the recording paper.

As if the clock did not have enough to do, it also has an unseen gong type mechanism underneath the movement shelf which makes contact with the barometer housing three times an hour. This mechanism being required to ensure that the barometer reading remains absolutely precise when it comes into contact with the paper. These wonderful meteorological instruments came to prominence in the 1870s by which time the aneroid barometer had become a firm domestic favourite. It is as yet unknown who developed this instrument but either Louis Casella or Negretti & Zambra are likely to have played a role in its creation.

Casella is known to have been awarded a prize medal at the 1862 Exhibition for self- registering meteorological instruments. His catalogue of 1871 which contains an example of a self-recording aneroid still proudly refers to the fact that he was the only instrument maker awarded for this invention suggesting that there was a healthy level of competition associated with the industry. Negretti in their Treatise on Meteorological instruments of 1864 also provides reference to mercury self-registering barometers based upon a design from Admiral Sir A Milne who supposedly constructed the first example in 1857. Admiral Fitzroy seems also to have approved of the design and dubbed it an Atmoscope or a barograph, perhaps the first occasion that the word is seen in print. Aside from the above, examples of these aneroid instruments are also known to have been retailed by all prominent scientific instrument makers of the Victorian era and they must have had some continuing popularity as an example remained amongst the product list of the JH Steward catalogue of 1885 where it is described as follows. This instrument is designed to show the various fluctuations which may have taken place in the barometer in the intervals between the hours of observation. It consists of a large and powerful aneroid, with very open range, and scale reading to 100ths of an inch, and an eight day clock, each with eight-inch dials; between these is placed, in a vertical position, a cylinder four inches in diameter.

The circumference of this cylinder is furnished with a tooth wheel, which works in an endless screw at the back of the instrument; it has a paper attached to it ruled to coincide with the barometer scale. This paper, besides being rules horizontally into inches and tenths, to correspond with the barometer scale, is divided vertically throughout its entire length of 12 inches into seven principal and seven minor divisions indicated by darker and lighter lines; the dark lines represent the noon, and the lighter lines the midnight of every twenty four hours. The paper (which is metallic prepared) thus lasts one week. Near the paper, a point guided by a rod of metal is moved up and down, as the action takes place in the aneroid, and at every hour the point is made to mark the paper by simple mechanism connected with the clock. A system of levers in connection with the clock produces a sharp tap or blow on the aneroid movement three times in every hour, to overcome any slight friction, and ensure a due response to the pulsations of the vacuum chamber.

By this means a black dotted curved line is produced, showing at a glance the height of the barometer, whether it is falling or rising, or how long it has been doing so, and at what rate the change is taking place whether at the rate of one-tenth per hour, or one tenth in twenty four hours facts which can only be obtained by very frequent and regular observations from an ordinary barometer, but which are, nevertheless, essential to a reliable weather forecast. The barometer has the advantage of freedom from complication, and has great improvements on those previously made, by which the friction is reduced to the minimum, and the greatest possible accuracy obtained. It is designed especially to suit the general public, and is handsome in appearance, and not easily put out of order, being admirably adapted for public libraries, the reading rooms of clubs, etc, as well as for use by meteorological observers generally. The case is made of walnut wood or mahogany.

By a Fellow of the Meteorological Society. The last paragraph is interesting as Steward references a popular publication commonly described in later facsimilie copies as having been published in 1849. This is certainly a misconception as the roman numerals on the front page suggest that it was in fact published in 1869 by which time the Meteorological Society was a fully established organisation. Indeed, the numerous types of barometers pictured and described within its pages would also have been unavailable to the market in 1849 as the aneroid barometer was still in its infancy at this point. This is further evidenced through the lack of a self-registering aneroid barometer in Negrettis 1864 publication, so it is likely that this type of instruments was developed from its mercury predecessors somewhere between 1864 and 1869 when it appeared in publication quoted above.

This is certainly the earliest reference I can find but they were certainly being advertised prominently by Casella by 1871. The business of James Henry Steward is considered to have started in 1852 where he is described as an optician.

It is not known from where he initially traded but he is first recorded in 1856 as residing and trading at 406 The Strand and from the founding of the NRA (National Rifle Association) in 1859, Steward was known to have regularly traded at shooting events held across the country, establishing a long and prosperous relationship with the sport. It is unknown whether Steward saw the sport as a niche marketing opportunity or whether he had a personal interest but using his skills he seems to have developed and patented many sights and optical instruments specifically for the field.

By at least 1862 he was advertising himself as, official optician to the National Rifle Association and was providing instruments as prizes and more shrewdly for the use of competitors on match days at Wimbledon Common. The 1850s and 60s also saw the rapid expansion of Stewards family with six children (four boys and two girls) being born within that period. The four sons, James Henry Charles, Henry William Lake, John James and William Jesse all joined the business as soon as they were old enough and each took the management of separate satellite premises at 456 West Strand, 66 The Strand and 54 Cornhill with the Head Office remaining at 406 The Strand. It is not understood why the family chose to open so many premises in such close proximity but business was clearly good enough for each to maintain a positive income.

These premises were all certainly in existence by the early 1880s where they are mentioned in the firms advertising alongside their affiliations to, The British and Foreign Governments and the National Rifle Associations of England, Ireland, India, Canada and America. The JH Stewards Improved Hourly Self-Recording Aneroid Barometer takes pride of place on the front page of their meteorological catalogues of 1885. The company seems to have continued to trade successfully through its second generation and given its advertising, was probably able to continue through the First World War by providing optical equipment to the military, however, as was the case for so much industry, the post war depression hit the company hard and by the 1930s the two sons of William Jesse Steward, James Henry and William Malcolm had no choice but to downsize the company. Managing to maintain the original premises at 406 The Strand they continued trading until the early 1970s whereupon the death of William and with the increasing frailty of James, Williams son David Steward took control. The remaining part of the instrument business was moved to Hove but was finally wound up in 1975.

It is somewhat heartening to know that the name of JH Steward lives on through the opticians business of a Simon Goldsmith. The Stewards longstanding and highly respected employee, George Goble arranged for the name to be transferred to his niece (Simon Goldsmiths wife) and through this, the generation spanning relationship with the National Rifle Association is maintained. The company, JH Steward (Bisley) Ltd still trades today as provider of optical instruments to the shooting industry. Jason Clarke Antiques are happy to discuss carriage, condition or for any other queries, alternatively, you can also message me and I will endeavour to come back to you as soon as possible. I have a number of beautiful antiques for sale, so please feel free to browse my other items.