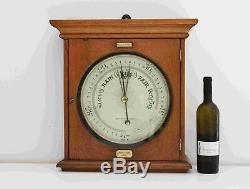 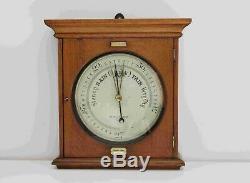 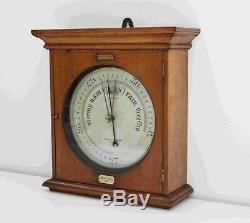 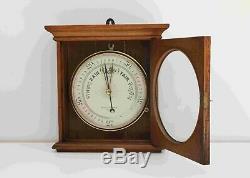 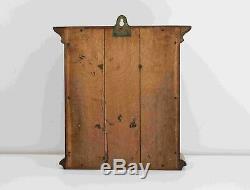 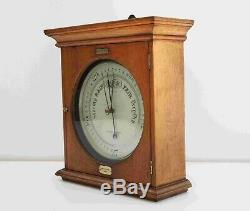 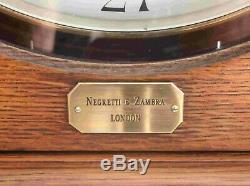 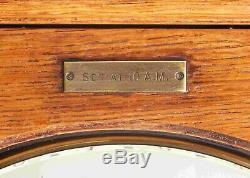 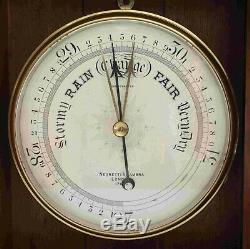 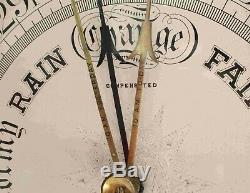 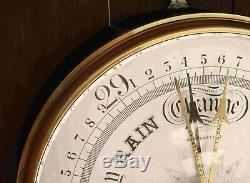 For sale, a huge Victorian public display aneroid barometer in original oak and glazed case by Negretti & Zambra of London. This highly unsual aneroid barometer has a twelve inch silvered and star motif engraved dial measuring 27 to 31 inches of barometric pressure and weather indications beneath.

It is further engraved with the word compensated to the top and with the makers name, Negretti & Zambra London and serial number of 17606. This feature was common on Negretti & Zambras mercury barometers during the period and became a standard during the Victorian period. The black painted barometer casing measures 33cms in diameter when incorporating the polished brass bezel and 10cms in depth. The barometer is hung and secured to the backboards of the golden oak case but can be removed if required. It has a hinged door with circular glass front and an original working lock and key and stepped cornice and pediment.

The case measures 51 cms in height, 49cms in length and is 17.5cms deep. It can displayed freestanding but also has a brass hook at the back of the case to allow for hanging. Quite obviously made for public display due to its size and it presence, it is likely to have hung in a Hall or a library. It does not seem to feature in Negretti & Zambras catalogues but its outward appearance owes much to the smaller RNLI Fishermans barometers of the 1880s, (although on a much larger scale) so it is perfectly possible that this was a working barometer supplied to a coastal town in the same way as Negrettis Mercurial Storm barometers were provided so that the town could benefit from accurate weather prediction. A fascinating and imposing instrument of which few examples exist.

Negretti & Zambra were a leading name in the production of meteorological and scientific instruments and had a company history dating back to 1850 although their parents were amongst those Italian emigres that bolstered the British meteorological instrument making industry at the turn of the century. Throughout their long and esteemed history they exhibited at British and international industrial fairs and became makers to both Queen Victoria and Edward VII.

Owing to changes in the business, the firm ceased the public retailing of scientific instruments sometime around the late 1960s and continued with a focus on the aviation industry in numerous guises until its eventual liquidation in the year 2000. They are today perhaps the most collected of the scientific instrument firms which bears testament to the quality of their work. Jason Clarke Antiques are happy to discuss carriage, condition or for any other queries, alternatively, you can also message me and I will endeavour to come back to you as soon as possible. I have a number of beautiful antiques for sale, so please feel free to browse my other items. The item "VICTORIAN PUBLIC DISPLAY ANEROID BAROMETER IN OAK CASE BY NEGRETTI & ZAMBRA" is in sale since Tuesday, September 1, 2020.