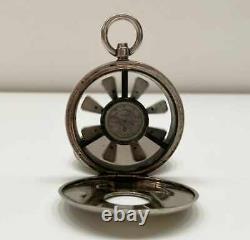 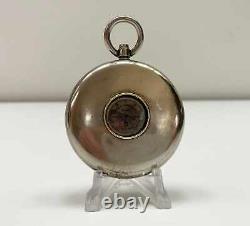 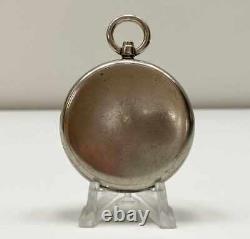 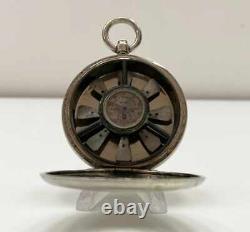 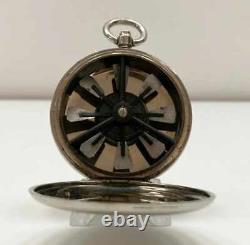 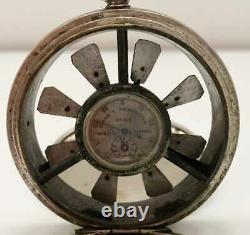 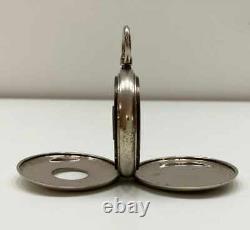 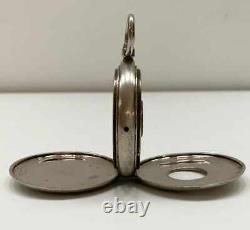 For sale, a scarce miniature pocket watch version of Birams patent anemometer by Wood of Liverpool. The instrument is contained within a pocket watch sized plated case with a hinged opening front and back.

The front face has a central hole cut out in order that the dial face can protrude through. The main and secondary dial measuring air velocity in feet it is engraved with Birams Anemometer to the top with Serial No: 404 and then signed below to Wood Liverpool. In the open position, the case reveals a frame surrounding the central dial with eight miniature fan blades which operate when presented against the airflow. The movement of these blades remains extremely sensitive and will move at the slightest notice.

Invented and patented in 1842, the Birams pattern anemometer was primarily for use in the mining industry. Benjamin Biram was steward and colliery engineer to Earl Fitzwilliam and paid particularly close attention to clean airflow through the mines for the continued health of the miners. His invention gained wide appeal and continued to be replicated into the Twentieth Century. The retailers of this fine instrument were George Smart Wood and John Wood (successor to his Father) both opticians and scientific instrument makers.

The company history began with the Wood Brothers (Edward, Henry & George) who originated in London and are likely to have worked with one another from premises in King Street and Shepperton Street, London from 1833 to 1843 mainly supplying the trade with finished instrument parts for the trade. The following year, 1884, Georges eldest brother left to form a partnership which became Horne, Thornwaite & Wood (latterly Horne & Thronwaite). The move and break up of the family business is likely to have been for the catalyst for Georges move to Liverpool. The date of Georges transfer is uncertain but it is likely that he initially worked for Abraham Abraham (of Abraham & Co) in Liverpool before he eventually went into partnership with him in 1849. To give a sense of their success, the company presented their work at The Great Exhibition shortly afterwards in 1851 but just four years later, Abraham retired, whereafter Wood continued to trade under the original name of Abraham & Co at 20 Lord Street Liverpool.

In similarity to his brother EG Wood, George seems to have been a shrewd business man, primarily acting as an optician. When he died in 1881, his son John took control of the business opening a secondary branch in Manchester in 1900 under the name of Wood Abraham. John eventually died in 1918 but the business continued up to the 1940s. This instrument is somewhat hard to date but is likely to have been retailed between 1870 and 1880.

The name of Wood engraved to the front is somewhat unusual given that the company mostly traded under the name Abraham & Co or Wood Abraham throughout its history. A few extant instruments exist with GS Wood (Late Abraham) which date to around the 1870s so it is likely that this anemometer was manufactured during this period.

Jason Clarke Antiques are happy to discuss carriage, condition or for any other queries, alternatively, you can also message me and I will endeavour to come back to you as soon as possible. I have a number of beautiful antiques for sale, so please feel free to browse my other items. The item "VICTORIAN POCKET WATCH BIRAMS ANEMOMETER BY WOOD OF LIVERPOOL" is in sale since Wednesday, December 2, 2020.

This item is in the category "Antiques\Science/Medicine\Scientific Instruments". The seller is "jason750_1" and is located in Newbury. This item can be shipped to United Kingdom.