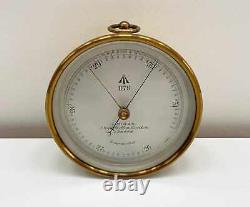 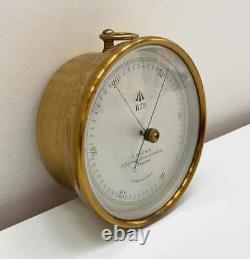 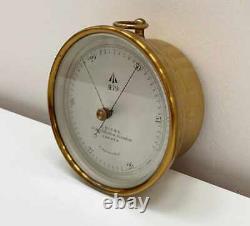 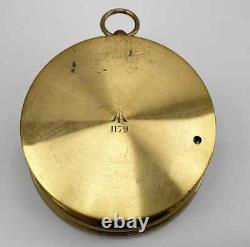 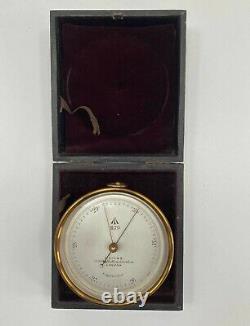 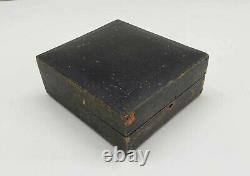 For sale, a Victorian cased Met Office aneroid barometer by J Hicks of Hatton Garden London. Wonderfully preserved with its original lacquered brass case, this temperature compensated barometer has a four and a half inch silvered dial measuring 26 to 31 inches of barometric pressure. The centre is engraved to J. Hicks, 8, 9 & 10 Hatton Gardens, London with a broad arrow mark above the serial number 1179.

The same marking is also present to the back of the case implying Meteorological Office use. The leather covered wooden case with red velvet interior has seen some wear and tear over the years but remains serviceable and has certainly done its job in protecting its contents, a superbly Victorian Met Office barometer which looks very much like it would have done on its first issue.

Owing to the address of 8, 9 & 10 Hatton Gardens it can be confidently dated after 1885 when the Hickss business premises were expanded to incorporate numbers 9 & 10. James Joseph Hicks was born in Cork, Ireland in 1837 to a poor farming family and was sent to London for schooling. He was apprenticed to the famous Louis P Casella where he remained until 1861.

In that short time he had already risen to become Casellas foreman, showing just how able the young Hicks was. Highly skilled in the development and the improvement of scientific instruments, Hicks business was large enough by 1880 to have over 300 employees on the books.

A shrewd marketer, he was present at eight Royal Society Exhibitions during the period, 1876 1913 and extended his reach overseas by attending numerous world trade fairs. He won a gold medal at the 1900 Paris exhibition.

In 1910 at the age of 73, he successfully negotiated a merger between his company and the equally famous WF Stanley and remained a director of the company that retained his name until his death in 1916. During his life he established a near monopoly on clinical thermometers leading to Hicks being dubbed, King of the Clinicals. Jason Clarke Antiques are happy to discuss carriage, condition or for any other queries, alternatively, you can also message me and I will endeavour to come back to you as soon as possible. I have a number of beautiful antiques for sale, so please feel free to browse my other items.