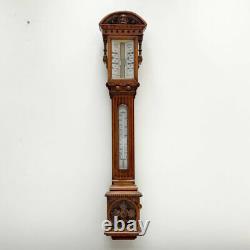 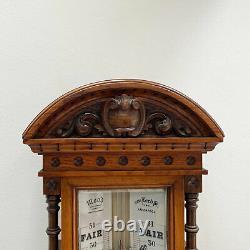 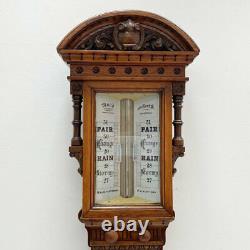 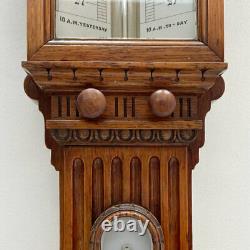 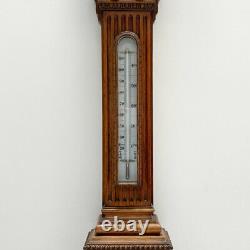 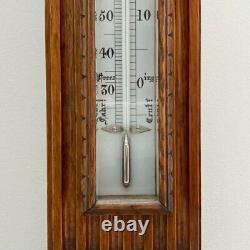 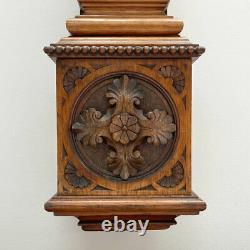 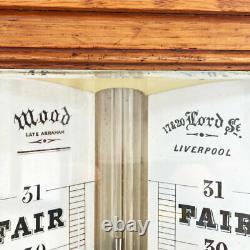 For sale, a very fine Victorian golden oak stick barometer by George Wood (Late Abraham) of 17 & 20 Lord Street, Liverpool. The architectural case is headed with a domed pediment containing a carved shield with rococo and acanthus leaf motifs. The pediment is supported by a turned oak column either side of the central scale wih floral carved capitals and flared acanthus feet. The bevelled glass to the centre protects an inverted opaline glass and painted scale showing weather indications and barometric readings for 27 to 31 inches of pressure. It is signed to "Wood Late Abraham, 17 & 20 Lord St, Liverpool" to the top.

An opaline glass Vernier is further provided either side of the glass tube to mark today and yesterday's readings. The verniers are operated below the plinth of the scale by means of two turned wooden knobs. Below that an opaline glass Fahrenheit and Centigrade scaled thermometer with carved case is surmounted on a fluted trunk running down the body of the instrument to another graduated and beaded plinth. The cistern cover below is emblazoned with a floral cross with central flower shaped boss and each corner following a similar half flower design. A very robust and superbly designed barometer which oozes quality throughout, from the bevelled glass fronts, the superb opaline glass scales and the sumptuous carving.

An extremely high quality Mid-Victorian stick barometer. The retailer of this fine instrument was George Smart Wood an optician and scientific instrument maker. The Wood family element of the company's history began with the Wood Brothers (Edward, Henry & George) who originated in London and are likely to have worked with one another from premises in King Street and Shepperton Street, London from 1833 to 1843 mainly supplying the trade with finished instrument parts for the trade. The following year, 1844, George's eldest brother (EG Wood) left to form a partnership which became Horne, Thornwaite & Wood (latterly Horne & Thronwaite). The move and break up of the family business is likely to have been for the catalyst for George's move to Liverpool.

The date of George's transfer is uncertain but it is likely that he initially worked for Abraham Abraham (of Abraham & Co) in Liverpool before he eventually went into partnership with him and Abraham's shop manager, Charles West in 1849. To give a sense of their success, the company presented their work at The Great Exhibition shortly afterwards in 1851 but just four years later, Abraham retired, whereafter Wood continued to trade under the original name of Abraham & Co at 20 Lord Street Liverpool and West set up under his own name.

In similarity to his brother EG Wood, George seems to have been a shrewd business man, primarily acting as an optician. When he died in 1881, his son John took control of the business opening a secondary branch in Manchester in 1900 under the name of Wood Abraham. John eventually died in 1918 but the business continued up to the 1940's. This instrument dates between 1865 and 1875, the name of Wood engraved to the scale is somewhat unusual given that the company mostly traded under the name Abraham & Co (or much later Wood Abraham) throughout its history.

A few instruments exist with GS Wood (Late Abraham) dating to around the 1870's which coincides with his sons joining the family business. It is likely that Wood considered that a name change would be appropriate but the maintaining of the Abraham name was evidently important from a marketing point of view. I suspect Wood considered it business sense to revert to the Abraham name, given its longstanding popularity. The founder of the original Abraham Liverpool business was Abraham Abraham, son of the famous Jacob Abraham who was a thriving instrument maker in Bath during the early part of the Ninenteenth Century. Given the fashionable setting, Abraham was patronised by various members of the nobility including The Duke of Wellington.

Similar to many instrument making families, it is likely that the younger Abraham sought to make a satellite business in another prosperous part of the UK and so in 1817 he moved to Liverpool and took up premises in Lord Street. During the latter part of the 1830's Abraham began a series of partnerships in order to broaden his trade further. He first partnered with Simon Phineas Cohen who opened a Glasgow shop in the Abraham name and shortly afterwards formed a more famous partnership with a young John Benjamin Dancer who took control of new premises in Manchester under the name of Abraham & Dancer. Both ventures finished within four years of their birth, the Glasgow premises were closed and the Manchester partnership was dissolved by mutual consent with Dancer left to trade in his own right. I suspect that the partnership formed between Abraham, West and Wood in the latter part of the 1840's was intended more as a means to enable Abraham to slowly move towards retirement.

As stated above, his departure followed shortly after The Great Exhibition. A fine barometer from a company with a similarly fine pedigree. Jason Clarke Antiques are happy to discuss carriage, condition or for any other queries, alternatively, you can also message us and we will endeavour to come back to you as soon as possible.