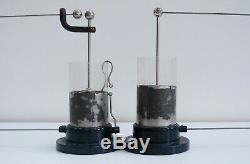 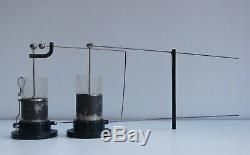 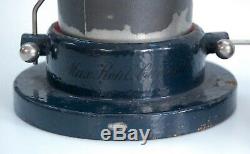 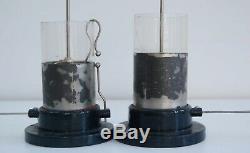 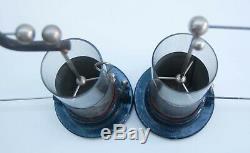 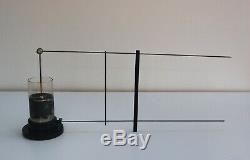 His syntonic jars experiment was finally patented in 1897 and established the concept of selecting one transmission from many by virtue of different frequencies, a concept which was of significant importance for the development of radio. The experiment is performed by linking the transmitter Leyden jar to an electrostatic machine, and which has a spark gap provided by two metallic balls attached to the frame above.

As the Leyden jar reaches capacity, a spark jumps the gap and with the jar acting as a capacitor and the frame acting as an inductor, a circuit is created that oscillates at a certain frequency. Ordinarily, the receiver was connected to a light bulb which would then pulse at the same time as the spark was generated on the other.

The original explanation for the experiment written by Lodge himself shortly afterwards is provided below. An experiment exhibited by me in its early stages at The Royal Institution a year ago, an since shown here in various forms, on the overflow of one Leyden jar by the impulses accumulated from a similar jar discharging in its neighbourhood, is so simple an illustration of electric resonance, and so easily repeated by anyone, that I write to describe it. Two similar Leyden jars are joined up to similar fairly large loops of wire, one of the circuits having a spark gap with knobs included, the other being completely metallic, but of an adjustable length.

The jar of this latter circuit has also a strip of tin foil pasted of its lip so as to provide an overflow path complete with the exception of an air chink. It is important that this overflow path be practically devoid of self-induction.

A jar already perforated could be well utilized for the purpose. Then if the two circuits face each other at a reasonable distance, and if the slider is properly adjusted, every discharge of A causes B to overflow. A shift to the slider puts them out of tune. Instead of thus adjusting by variable self-induction, my assistant, Mr Robinson has made a slight modification by using a condenser of variable capacity, consisting of two glass tubes coated with tinfoil, one sliding into the other, and joined by a flexible loop of wire; an easy overflow from one coat to the other being likewise provided.

On making this loop face the discharge circuit of an ordinary Voss machine with customary small jars in situ, bright sparks at the overflow gap occur whenever the common machine sparks are taken, providing the sliding condenser be adjusted to the right capacity by trial. There is little or no advantage in using long primary spark; the vibrations are steadier and more definite with short ones. It is needless to point out that the two jars constitute respectively a Hertz oscillator and receiver, but fair precision of timing is more needed with these large capacities than with mere spheres or discs, because the radiation lasts longer and there are more impulses to accumulate. Hence actual resonance as distinguished from the effect of a violent solitary wave is better marked.

Max Kohl apparatus is highly sought after and this piece is a somewhat rare example of this companys work. In super condition, it reflects an interesting period in both electrical experimentation and the early history of radio technology. Jason Clarke Antiques are happy to discuss carriage, condition or for any other queries, alternatively, you can also message me and I will endeavour to come back to you as soon as possible. I have a number of beautiful antiques for sale, so please feel free to browse my other items.

The item "SIR OLIVER LODGE ELECTRIC RESONANCE LEYDEN JAR EXPERIMENT BY MAX KOHL GERMANY" is in sale since Wednesday, June 19, 2019. This item is in the category "Antiques\Science/Medicine\Scientific Instruments". The seller is "jason750_1" and is located in newbury, Berkshire. This item can be shipped to United Kingdom.