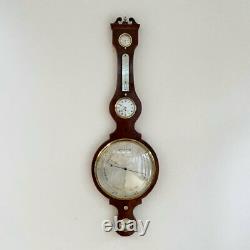 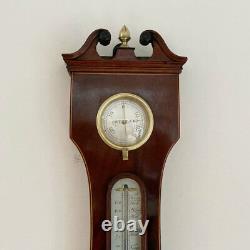 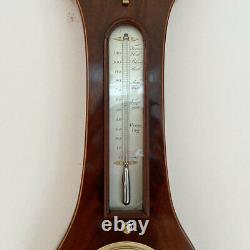 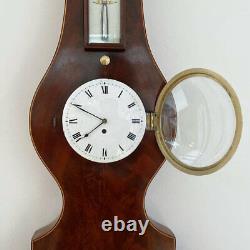 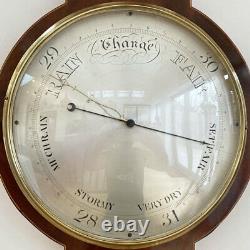 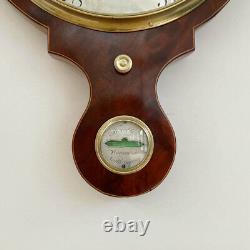 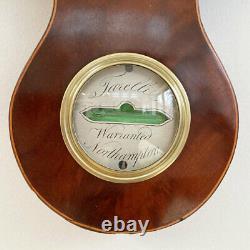 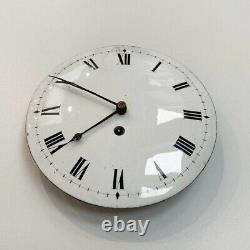 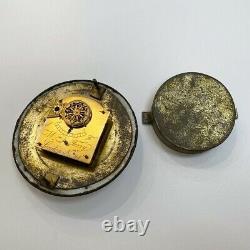 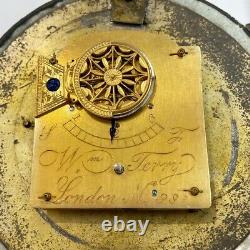 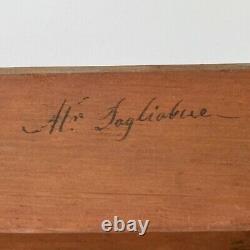 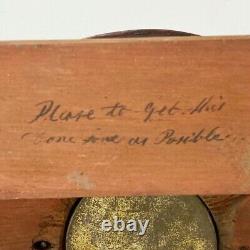 For sale a rare George IV mahogany and Satinwood banded Wheel Barometer with Clock retailed by Tarelli of Northampton. This beautifully imposing wheel barometer is fitted with a very large twelve inch silvered and engraved dial measuring 28 to 31 inches of barometric pressure with weather indications around the inner circumference of the scale.

It has a fine blue steel pointer and brass set hand all enclosed behind a spun brass bezel and convex glass front. The set hand is operated below by means of a brass dial and is accompanied at the base with a spirit level with an engraved face plate behind a convex glass stating the name, Tarelli (Warranted), Northampton. Above the main dial, the outswept neck provides space for a sedan clock with a superb 30-hour fusee movement and ceramic dial with a hinged bezel and convex glass to the front.

The movement is engraved to the clockmaker, William Terry, London with the serial number: 98. Having been hidden behind its backplate, the movement looks almost as it would have when the barometer was manufactured. Terry was a prolific maker of these clock movements and his name is often encountered on both sedan clocks and clock barometers of this period. The centre of the neck has a removable, cased Fahrenheit thermometer with silvered dial measuring 0 to 100 degrees and with temperature indications on the right.

Above is a removable wheat beard hygrometer with convex glass for monitoring humidity and the barometer is completed with a fine broken swan neck pediment with a central brass acorn finial. The barometer case is covered with a superb flame mahogany veneer with satinwood banding around the entire outer edge giving it subtle but very refined definition. Given the addition of a twelve-inch dial, this is also makes a superb statement on the wall. It measures 120cms in length and 37cms in width. The reverse of the barometer has a door to access the barometer tube and it reveals some interesting associated history.

Please to get this done soon as possible. There are numerous indications confirming this barometer to be of London manufacture. The style and quality of finish is not what one would expect from a regional example and the inclusion of a London clock movement provides some further support to this theory. Information on Charles Tarelli's career is sparse expect for some indicative working dates of 1800 to 1830.

He is also listed as having dealings in Northampton, Banbury and London but I suspect the latter is probably an early apprenticeship. The London maker Cesar Tagliabue played a significant part in the history of Nineteenth Century scientific instrument manufacturing. Like many makers of this period of Italian birth, Tagliabue hailed from the Como region of Italy. Born in 1767, it is unclear when he arrived in Britain but is considered to have begun trading in Holborn, London in 1799 with a partner Anthony Della Torre until 1806 where after he traded under his own name.

By 1820, Tagliabue had moved to the famous London centre of scientific instrument making at Hatton Garden and took on a young Louis Casella as an apprentice. The name Casella is now synonymous with the history of the industry and after marrying Tagliabue's daughter in 1837, went on to form the partnership of Tagliabue and Casella with his new father-in-law in 1838. It is somewhat strange that this partnership should ever had existed given that Cesar is known to have had three sons, John, Anthony & Angelo but presumably his focus was on providing his daughter and her husband an equally good opportunity in life. The numerous Tagliabue's listed in trade directories of the period would suggest that the family remained close knit in any case and the son John also went on to form an early partnership with the world-renowned Joseph Zambra prior to the latter's more famous partnership with Henry Negretti in 1850. This seemingly innocuous but direct note by Tarelli to Tagliabue on the door of this barometer transports us to the Tagliabue's London workshops and it is reasonable to consider that Tagliabue himself would have once handled this instrument.

For those interested in the barometer trade of the early Nineteenth Century, this is a rare insight and provides tangible evidence of the interplay between Italian makers in London and in the regions at the time. That this fascinating insight is also placed on one of the rarest and most desirable forms of wheel barometer makes this an exemplary example. The barometer and clock have both been serviced and are in full working order. Jason Clarke Antiques are happy to discuss carriage, condition or for any other queries, alternatively, you can also message us and we will endeavour to come back to you as soon as possible.

This item is in the category "Antiques\Science/Medicine\Scientific Instruments". The seller is "jason750_1" and is located in this country: GB.