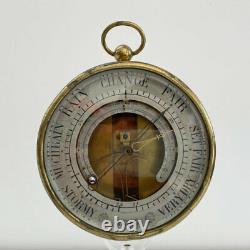 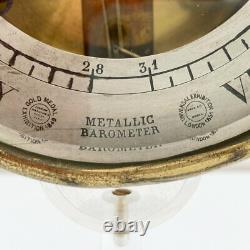 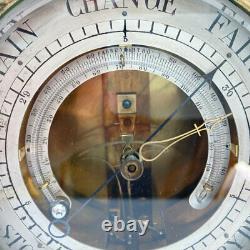 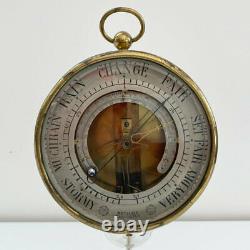 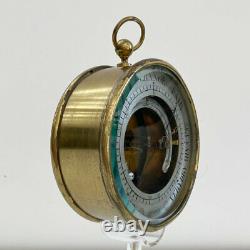 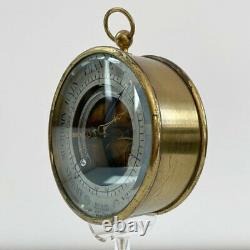 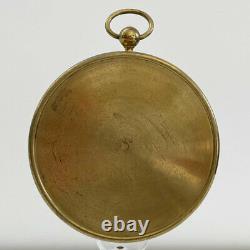 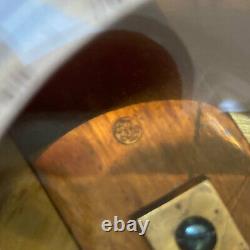 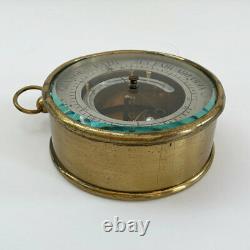 For sale a Series 2 Bourdon & Richard aneroid barometer with integrated thermometer scale. This rare example of a bourdon barometer has a five inch silvered dial showing 28 to 31 inches of barometric pressure set behind a robust bevelled edge glass. It has a blue steel indicating hand and a brass pointer operated by a knurled knob to the front of the glass. The silvered dial is engraved with the words, metallic barometer with medallions either side referencing the awards that Bourdons invention had won at both the Paris Exhibiton 1849, Bourdon & Richards Patent (Gold Medal) and at the Universal Exhibition, London 1851 (Council Medal).

In addition to the main dial, this example has a secondary silver Fahrenheit thermometer scale suspended just behind. An extraordinarily scarce feature for a Bourdon barometer. Unlike most aneroid barometers of the period, the brass drum case has a removable back with a slot which is secured by means of two pins affixed to the drum. To remove the back, the slot is aligned with one of the pins and the back lifts off. The movement has Bourdons tell-tale crescent shaped flattened vacuum tube with fan shaped rack operated by twin levers and is stamped to the top of the mechanism with the name, Bourdon Richard, Brevete a Paris with associated serial stamp.

The front of the plate is also stamped with the Bourdon and Richard motif visible through the front glass. The Series 2 represented a slight improvement to Bourdons Series 1 movement and this example is highly unusual for the inclusion of a thermometer. It still maintains the early anchor shaped rack rather than the later tear-dropped version but does have an adjustable lever mechanism which could be operated by a key at the back of the barometer. This transitional feature coupled with the earlier rack movement would suggest a date of manufacture somewhere close to 1870. Bourdons designs for both barometers and pressure gauges were met with approval at The Great Exhibition in 1851 winning him a council medal alongside his competitor Vidi.

Bourdons movement however were slightly more fragile than Vidis and although they continued to be produced until the turn of the century, they were less well received. As early as 1863, Admiral Fitzroy, Chief of the Meteorological Department of the Board of Trade commented that, they are not so well adapted for travellers, nor for the measurements of considerable elevations, as Vidi aneroids, which in some part contributed to the lack of uptake in the UK. Bourdon continued to work on numerous other designs and eventually became more renowned for his work on pressure gauges. He was a prolific inventor and died in 1884 whilst undertaking experiments on the effects of wind on steam locomotives.

A fall from a moving carriage resulted in a head injury from which he died a few days following the accident and was buried in Pere Lachaise cemetery, Paris. His barometer movements are today prized for their workmanship, beauty and for their rarity. Bourdon movements of this age are somewhat rarely encountered in comparison to those produced by Felix Richards sons, it is highly unusual to encounter one with a thermometer. Beautifully engineered, still functioning and also retaining the majority of its original finish.

A super example of its type. Jason Clarke Antiques are happy to discuss carriage, condition or for any other queries, alternatively, you can also message us and we will endeavour to come back to you as soon as possible.

The item "RARE VICTORIAN SERIES 2 BOURDON & RICHARD ANEROID BAROMETER WITH THERMOMETER" is in sale since Monday, June 21, 2021. This item is in the category "Antiques\Science/Medicine\Scientific Instruments". The seller is "jason750_1" and is located in newbury, Berkshire. This item can be shipped to United Kingdom.