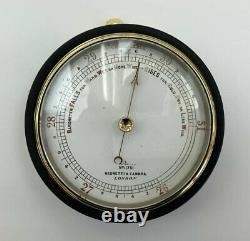 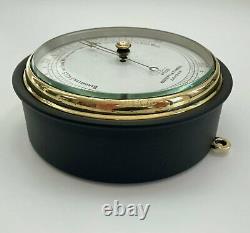 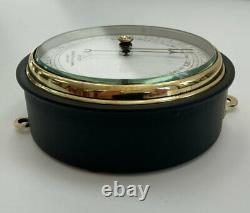 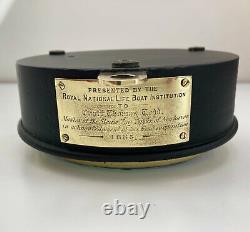 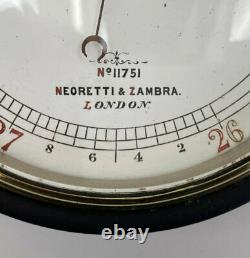 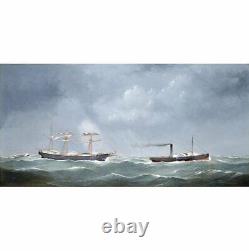 For sale, a unique Victorian presentation RNLI Aneroid Barometer by Negretti & Zambra of London - No. Comprised of a five inch porcelain dial with painted scale showing 26 to 31 inches of barometric pressure. Unlike most of its kind this barometer is not detailed to the upper portion of the dial with the words, Fisherman's Aneroid Barometer however it retains the serial number (11751) and company name of Negretti & Zambra London to the base.

The barometer movement is enclosed within a painted zinc case with thick brass bezel and bevelled glass front with brass set hand. Most of these barometers were provided to fisherman by The Meteorological Office to give them clearer warning of inclement weather and as a means of keeping fisherman safe at sea. The fact that this example does not contains the words, "Fishermans Aneroid Barometer" are made clear by the brass plaque affixed to the top of the case. Presented by The Royal National Life Boat Institution to Captain Thomas Todd, Master of the Steam Tug Tipper of Newhaven in acknowledgement of his kind co-operation - 1883. The circumstances under which Captain Todd received his award are replicated from The Lifeboat or Journal of The National Lifeboat Institution - May 1. 25 1883 - Intelligence was received this day at the Eastbourne Life-boat Station that a large foreign barque was riding at her anchors off Beachy Head Lighthouse, in a very dangerous position, with a signal of distress flying. With as little delay as possible, the crew of the William and Mary Life-boat were mustered, and the boat, mounted on its transporting carriage, started for Birling Gap, drawn by seven horses. The route taken was through Meads, where three additional horses were procured, and with thin extra power she speedily mounted the hill, and crossed the downs to Birling Gap, a distance altogether of five miles. There the boat was obliged to be taken off her carriage, as the Gap had to be widened to admit even of the passage of the boat, and the incline was very sharp. The lower part of the Gap had been washed away by the sea, but this difficulty was overcome by using some long pieces of timber which were fortunately on the spot. Under the superintendence of the coxswain the boat was, by great exertions, got safely down to the beach, and was launched at 1.15. The wind was blowing a gale from the S.

And a tremendous sea was rolling in. After a period of suspense, the Life-boat was seen making for the shore, and in gallant style she took the beach almost close to the spot from whence she had started, and landed the rescued crew of eleven men. The Life-boat had anchored as close as possible to the vessel, and the crew were then hauled into her. The poor fellows, who were in a very exhausted state, one of them having sustained a fracture of the ribs, were taken to the Coastguard Station, where they received every attention from the Chief Officer and the Coastguardmen. The Life-boat was got up the Gap with considerable difficulty, and arrived back at her station about 7.30.

The distressed vessel was the barque New Brunswick, of Brevig, 480 tons, bound from Quebec to West Hartlepool, with a cargo of deals. The story provided by the RNLI during this period gives a very matter of fact account of the rescue of the New Brunswick barque and you would be forgiven for asking the question why a Newhaven tug was awarded for an event in which it seemingly had no involvement. The reality was that the Newhaven RNLI station was initially called upon when the danger was recognised but unfortunately, the steam tug (presumably the Tipper) required to pull the lifeboat out to sea was at that point lacking in steam. This occurrence led to the Eastbourne station having to go to the extra exertion of hauling their boat over The Birling Gap by land. Following the daring rescue, the Eastbourne lifeboat crew were quite rightly feted as heroes and a public fund was raised from which each man received four pounds and a silver medal. This might have sufficed the men except for the knowledge that the following day, the Newhaven lifeboat had commandeered the Steam Tug Tipper (under Todd) to return The New Brunswick back to harbour. However, his attempts to correct the financial imbalance for his men's efforts backfired quite quickly due to an RNLI Committee ruling which stated that salvage could be claimed for property but under no circumstances could be claimed for the saving of lives.

It is likely the detailed circumstances will never be known precisely but it remains slightly ironic that the RNLI would provide an award for actions that ultimately led to the dismissal of an entire lifeboat crew. Not a story worthy of The Lifeboat magazine of course but a hugely fascinating story with a rather Machiavellian twist. The Eastbourne lifeboat station website still reminisces on their crew's actions of 1883 but the repercussions are perhaps more conveniently hidden.

In reference to the barometer design itself, Negretti & Zambra were advertising "The Fisherman's Aneroid Barometer" as early as 1864 where their catalogues state. No trouble or expense has been spared to obtain a trustworthy instrument at a moderate cost. It is mounted in a stout metal case, with a plate glass covering, the dial is of enamelled metal and five inches diameter. The range of scale is 26 to 31 inches, subdivided into tenths, corresponding with the scale of the mercurial barometer.

It will be noted at the top of the dial is placed the word CHANGEABLE, to the right and left of this word is printed a condensed form of Admiral Fitzroy's rules for prognosticating the coming weather. Should the blue index move to the right fine weather may be anticipated; on the contrary, should it recede to the left, bad and stormy weather is indicated. These movements correspond with those of the mercurial barometer, hence the aneroid, like the mercurial instrument, is said to be rising, falling or steady. The moderate cost for one of these barometers at the time was one pound and fifteen shillings. Both Negretti & Zambra & Dollond were the only suppliers deemed of sufficient quality and standards to produce this design and these barometers were used on fishing vessels towards the end of the century.

All examples by either supplier are manufactured with a zinc metal casing and an enamelled dial enclosed behind a brass bezel with thick plate glass insert. Negretti & Zambra's relationship with the RNLI began in 1857 after Admiral Robert Fitzroy requested the company to provide a design for a stick barometer that would be fit for installation at sea coast stations throughout the UK. Fitzroy's new position at the Meteorological Office, his previous experiences in the Royal Navy and upon his famous expedition in HMS Beagle with Charles Darwin had shown him the importance of precise methods of weather prediction and his intent was to make these expensive instruments accessible to individuals who were involved in the maritime and coastal industries.

These iconic mercurial instruments were initially supplied through the Meteorological Office and paid for by HM Government but Negretti & Zambra were certainly advertising the early porcelain scaled version to the general public by 1864 as they are recorded in the company's, "Treatise on Meteorological Instruments" with advertising that stated that, "many poor fishing villages and towns have therefore been provided by The Board of Trade, at the public expense, and through the humane effort of Admiral Fitzroy, with first class barometers, each fixed in a conspicuous position, so as to be easily accessible to all who desire to consult it". The result was the Fisherman's Aneroid Barometer and it remains one of the most robust and good looking aneroid barometers from the period. The relationship with Admiral Fitzroy and the RNLI allowed Negretti & Zambra to become a leading name in the production of meteorological and scientific instruments.

The company was founded in 1850 although their parents and close family acquaintances were amongst those Italian emigres that bolstered the British meteorological instrument making industry at the turn of the century. Throughout their long and esteemed history they exhibited at British industrial fairs throughout and became makers to both Queen Victoria and Edward VII. Owing to changes in the business, the firm ceased the public retailing of scientific instruments sometime around the late 1960's and continued with a focus on the aviation industry in numerous guises until its eventual liquidation in the year 2000. They are today perhaps the most collected of the scientific instrument firms which bears testament to the quality of their work. A fine and historic example of an aneroid barometer from one of the highest quality makers of scientific instruments during the nineteenth century with a fine piece of associated social history.