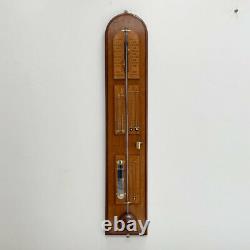 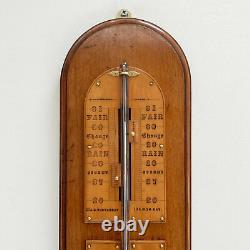 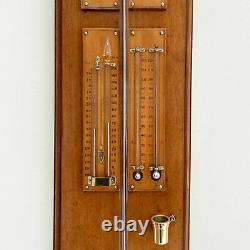 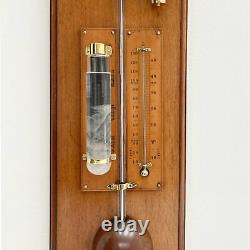 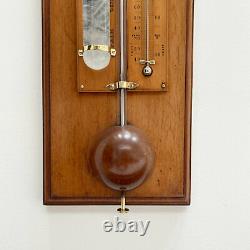 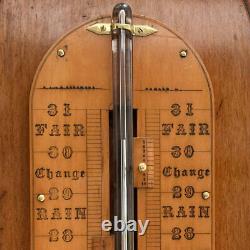 For sale a very rare early Victorian stick barometer weather station by S&B Solomons of London. Presented on a large seven and a half inch wide mahogany backboard with domed top and chamfered edge surround, the exposed barometer tube runs centrally down the full length of the instrument with half globe mahogany cistern cover to the base and cistern adjustment screw below. The two part boxwood barometer scale is styled with a similar design to the backboard with domed top and is engraved with a matching scale either side measuring 26 to 31 inches of barometric pressure.

The reason for the dual scale is made evident by two boxwood sliding Vernier scales on each side of the tube which allows the user to track current daily readings against the previous day. The maker's name of S&B Solomons, London.

Is also marked to the head of the scale. However, the remaining space on the barometer is what makes this instrument hugely interesting.

Below the barometer scale, two further boxwood scales are provided. The lefthand side includes an example of a Six's max/min thermometer which incorporates miniature pins within the thermometer bore and allows the recording of maximum and minimum temperatures whilst the user is not present. On the righthand side is a hygrometer or wet and dry thermometer which allows the user to deduce the dew point within the atmosphere. A small brass bucket is provided below in order to carry a small amount of water.

A small wick would be placed over the wet thermometer bulb and continually soaked by the water feeding up the wick from the bucket below. As if all of the above was not enough, a further boxwood section just above the cistern cover provides a storm glass to the left with weather indications engraved to an accompanying scale and a normal thermometer to the right with a scale for both Fahrenheit and Centigrade. A simply fascinating instrument which would have been produced at the time where weather prediction was becoming a popular and much more scientific pastime for interested amateurs. The developments of Admiral Fitzroys meteorological work brought this branch of science to the public eye and instrument makers were keen to provide the public with instruments that would provide more succinct and accurate methods of weather prediction.

It is likely that as was largely the case for the sympiesometer, the onset of the more agile aneroid barometer put pay to the success of many of these fascinating instruments and they are therefore seldom encountered. Presumably from Jewish extraction, the opticians Samuel & Benjamin Solomons traded from 1832 to 1879 but there is scant information available on this long and prosperous partnership. They traded primarily from the address at 39 Albemarle Street in Piccadilly opposite The York Hotel and are noted in the archives as having lodged a registered design in 1863. From advertisements in the same year it seems likely that this was for their "patent tinted spectacles" for which they proclaimed that their invention was "patronised by the majority of nobility including Viscount Palmerston".

Earlier in 1839, advertisements in the Spectator for the company's "newly-invented operative voice conductor", (a hearing aid), proudly proclaims that they were "opticians and aurists to Their Majesties the King and Queen of Hanover and Their Royal Highnesses the Princess Augusta and Sophia". Although little is widely known of this partnership, they certainly made shrewd use of advertising throughout their career, positioning their adverts across a wide and varied selection of publications of the era from The Ecclesiastical Gazette to The North Wales Chronicle. If their adverts are to be believed, they were patronised by both Royalty and The British Government during this time.

Jason Clarke Antiques are happy to discuss carriage, condition or for any other queries, alternatively, you can also message us and we will endeavour to come back to you as soon as possible. This item is in the category "Antiques\Science/Medicine\Scientific Instruments". The seller is "jason750_1" and is located in this country: GB.