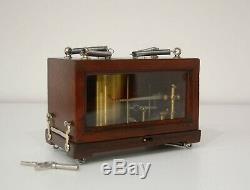 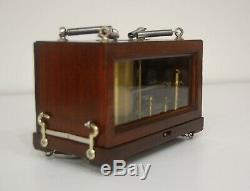 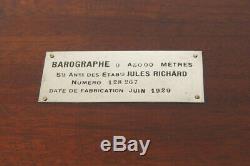 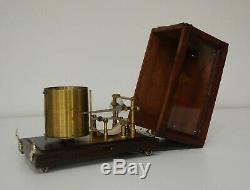 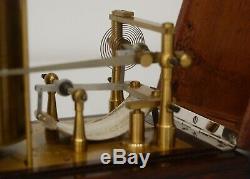 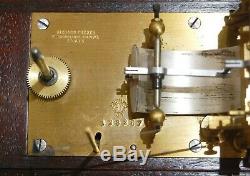 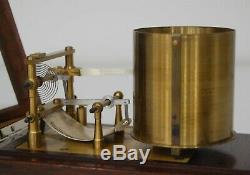 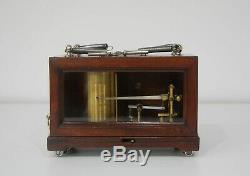 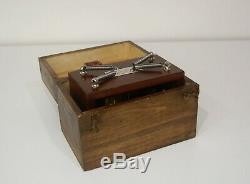 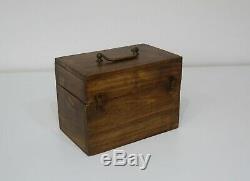 For sale, an early twentieth century Bourdon tube barograph for aviation use by Richard Freres of Paris in original pine carry case. This extremely rare and petit example of a barograph (20cms in length & 12cms in height) is housed in a mahogany case with a single glazed front viewing section which alludes to its use as a working instrument rather than a showpiece. This is further evidenced by the inclusion of springs attached to each corner top and bottom in order for the barograph to be hung within the aircraft whilst in flight and to avoid it encountering any unnecessary impacts. A plate to the lid is engraved with the following.

Ste ANme DES ETABts JULES RICHARD, NUMERO 128267. DATE DE FABRICATION JUIN 1929. The lid is hinged at one end and can be lifted by releasing two hook and eye catches. The hooks have additional lever stops which offer further protection in avoiding the lid coming open during flight use.

The mechanism is similar in most respects to the more commonly encountered capsule examples in that it contains a drum recorder and pen shaft, however the capsules are instead replaced on this example by a crescent shaped Bourdon tube and therefore the means of transferring the movement of the tube to the drum also differs somewhat in style and manufacture. The brass lacquered base of the instrument is further stamped with the same serial number as appears on the lid and is further marked to Richard Freres Constructeurs Brevetes Paris and with the RF logo and Brevetes SGDG, Paris. This diminutive example is contained within its original pine case with brass handle to the top and hook latches to the front. I can find few records of any Bourdon tube barographs which makes this a hugely rare piece for both collectors of scientific instruments and early aviation equipment. It is pictured in an obscure US technical memorandum for the National Advisory Committee for Aeronautics in 1928 (just a year before this pieces manufacture) where Richard Freres products are described.

Of this instrument, the publication simply relates that. The Richard Company makes entirely satisfactory aneroid barometers. The same firm also makes a Bourdon tube barograph (Fig 19a), which gives very good results, and a very accurate 0-1200m altimeter suspended by springs inside the standard collar required by the French technical services. It must therefore be assumed that this barograph had some level of global success as a useful piece of aviation equipment although its rarity is beyond doubt.

Bourdons designs for both barometers and pressure gauges were met with approval at The Great Exhibition in 1851 winning him a council medal alongside his competitor Vidi. Bourdons movement however were slightly more fragile than Vidis and although they continued to be produced until the turn of the century, they were less well received.

As early as 1863, Admiral Fitzroy, Chief of the Meteorological Department of the Board of Trade commented that, they are not so well adapted for travellers, nor for the measurements of considerable elevations, as Vidi aneroids, which in some part contributed to the lack of uptake in the UK. Bourdon continued to work on numerous other designs and eventually became more renowned for his work on pressure gauges. He was a prolific inventor and died in 1884 whilst undertaking experiments on the effects of wind on steam locomotives.

A fall from a moving carriage resulted in a head injury from which he died a few days following the accident and was buried in Pere Lachaise cemetery, Paris. His barometer movements are today prized for their workmanship, beauty and for their rarity.

The maker of the barograph was Jules Richard (1848 1930), the son of Felix Richard, Bourdons original partner. Trained under his father and numerous other scientific and clock manufacturers, Richard made his own name in the 1870s in the manufacturing of telegraph equipment, also working closely with the French scientist EJ Marey on electrical and photographic recording techniques. Following the death of his father in 1876, he took over the family business and in 1882, he formed a partnership with his brother Max under the name of Richard Freres. This partnership was dissolved in 1891 but the company maintained its partnership name with Jules taking sole control of the business until 1921 when it was listed as a public company. It diversified in later years into photographic equipment but the bourdon movement was a stock trade item for the company and was put to numerous uses amongst their huge array instruments. Jason Clarke Antiques are happy to discuss carriage, condition or for any other queries, alternatively, you can also message me and I will endeavour to come back to you as soon as possible. I have a number of beautiful antiques for sale, so please feel free to browse my other items.