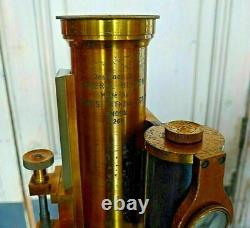 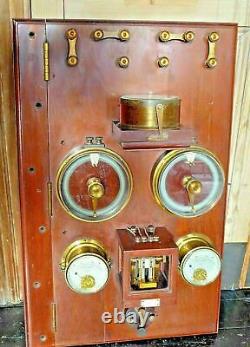 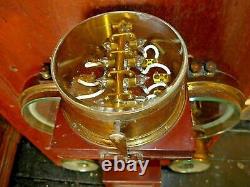 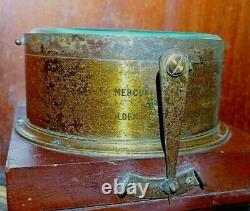 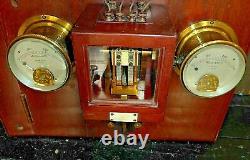 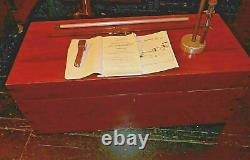 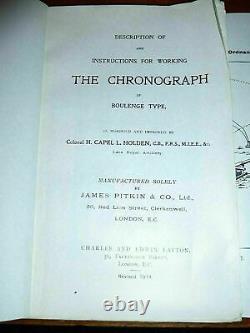 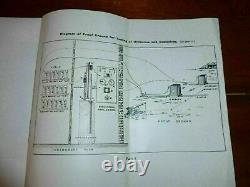 For sale is an extremely rare 1. World War and before period Boulenge type Ballistic Chronograph made by James Pitkin & Co. It comes complete with its original control panel, various accessories and its large mahogany case and is believed to be complete with all its associated components and also has a copy of an original instruction booklet (dated 1914). This extraordinary instrument was designed by (then) Colonel Holden of the Royal Artillery and used in the testing of ordnance to accurately measure of the speed of ammunition projectiles. Use of these instruments is believed to have ended towards the end of the 1st World War when improved technology is developed although it was accurate to about 1.4 feet per second. It operated by measuring the length of time taken for an artillery shell to travel between two glass screens placed its path, one at the start and one end of its travel. The screens were laced with fine wires and connected to the control panel. The main lacquered brass apparatus has a vertical steel rod held up by an electromagnet. As the projectile passes through the first glass screen, a circuit is broken, allowing the steel rod to start dropping.

When the artillery shell reaches the second glass screen, another circuit is broken, causing a line to be scored on the steel rod as it drops. The position of the scored line on the steel rod allows the speed of the shell to be calculated.

Altogether a rather'Heath-Robinson' contraption, but it nevertheless became widely used to test shells during the 1. The instrument itself is approximately 30 tall and comprises a vertical brass column inscribed'Designed by General Holden. Made by James Pitkin and Co, London, No.

268', the column has various components attached and stands on a heavy levelling tripod base. The Control Panel comprises a substantial hinged mahogany board 36 inches tall and 23 wide on which are mounted various components including a Holden Mercury Reverser Switch, two Rheostats, a Holden Disjunctor with ivorine label and two milliammeters. Condition of the instrument is good with virtually all of the original brass lacquer present, although partially spotted/corroded in some areas, mainly on the control panel (please refer to photos).

The only minor damages I can find relate to the Control Panel and are a missing small knob from the end of the arm on the reverser switch and minor damage to the edge of an ivorine label on disjunctor housing. For further information or photos - please ask. Please note that the photos form part of the description. This item is in the category "Antiques\Science/Medicine\Scientific Instruments". The seller is "amperesand" and is located in this country: GB.