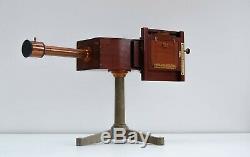 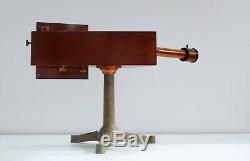 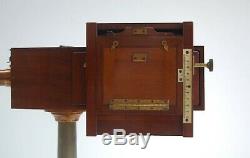 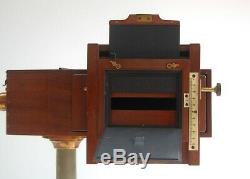 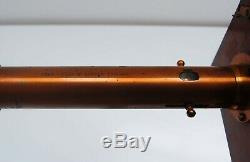 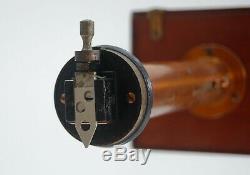 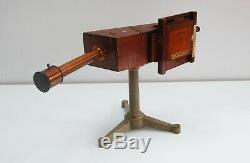 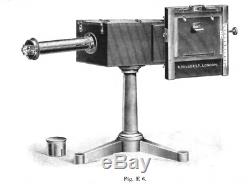 For sale, an early Twentieth Century quartz spectrograph by Adam Hilger Ltd, London. The spectrograph is an instrument used to record a light spectrum of an object effected by the incorporation of a prism. The splitting of the light from an object into component wavelengths is in this instance recorded on photographic paper and the resulting spectral lines produced on the plate can be used to determine the composition of the chemical elements contained in the sample. The company of Adam Hilger was established by Johann Adam Hilger, a German immigrant scientific instrument maker who had settled in London.

Hilger died in 1897 leaving his brother Otto in charge of the business and Frank Twyman joined a year later. Twyman would succeed as manager of the company in 1902 upon Ottos death and it was incorporated by him in 1904.

It also incorporated the company of J. Twyman continued to act as managing director until 1952 and thereafter remained as scientific advisor to the company.

He was by this time elected as a Fellow of the Royal Society. Following his death in 1959, Hilger & Watts continued to trade until it was eventually acquired by Taylor, Taylor and Hobson in 1968. Hilgers catalogue of 1920 includes this particular model and it is described as follows. Quartz Spectograph size E6 (formerly known as size A) Lenses of 8 inches (203mm) focus, the instrument (see Fig E6) giving a spectrum from 200pp to 800pp of about 65cms long. Size of plate 4 and a quarter x 3 and a quarter inches. The slit is our No F24 (see F5). The dispersing system consists of one Cornu prism. Accurate scale of wavelengths have been prepared in connection with this spectrograph. These scales are photographed on glass, and can be laid direct on the spectrograms to read off the wavelengths. They are prepared to suit each individual instrument, and are sufficiently accurate to determine the identity of most lines.

Jason Clarke Antiques are happy to discuss carriage, condition or for any other queries, alternatively, you can also message me and I will endeavour to come back to you as soon as possible. I have a number of beautiful antiques for sale, so please feel free to browse my other items. The item "QUARTZ SPECTROGRAPH BY ADAM HILGER LTD LONDON" is in sale since Monday, March 11, 2019. This item is in the category "Collectables\Scientific Collectables\Optical". The seller is "jason750_1" and is located in newbury, Berkshire.