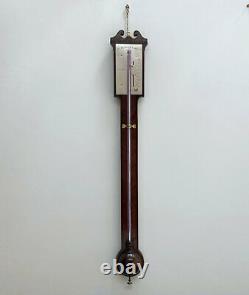 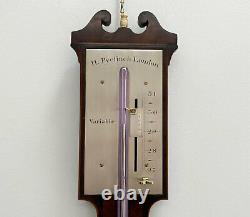 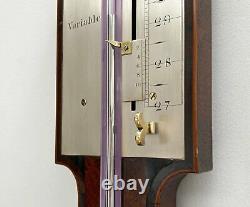 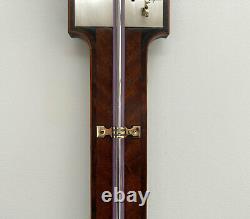 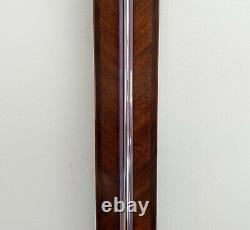 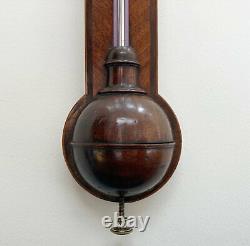 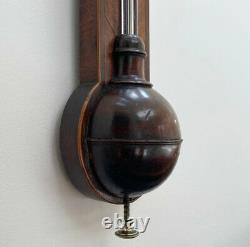 For sale, a rare mid Eighteenth Century mahogany stick barometer by Henry Pyefinch, London. Superbly crafted with chevron veneer across the trunk of the barometer with mahogany and satinwood outline stringing around its circumference, the barometer is crested with an early style swan neck pediment with finial and a unusually wide scaleplate. The silvered plate is very simply engraved for 27 to 31 inches of barometric pressure to the right hand side with a single weather indication of "variable" to the right, presumably marked as the centre point between clement and inclement weather. For more accurate measurement, the scale has a Vernier scale which is operated by means of a brass key to the front. The head of the plate is further engraved to the famous Eighteenth Century maker, H. The exposed tube runs down the front of the body into the bulbous type cistern cover with brass adjustment screw to the base. The maker Henry Pyefinch was apprenticed to the hugely renowned Francis Watkins shortly after Addison Smith in 1753. Smith went on to partner and marry into the Watkins family leaving Pyefinch to set up on his own account by 1761 at the sign of The Golden Quadrant in Cornhill. His early career is tainted by the aggressive legal actions undertaken by Peter Dollond in respect of his patent for the achromatic lens. Francis Watkins & Addison Smith were famously connected to the Dollond family as they initially assisted the Dollonds to attain the patent but with serious concern over the rights to the invention arising, Watkins was left in a difficult position. His own experience led to the end of the partnership with the Dollonds but in 1768, Pyefinch also became embroiled. Following his departure from Watkins's apprenticeship, Pyefinch immediately agreed a deal with the Dollonds to sell the new achromatic lens and is named as early as 1764 amongst the advertising material. Issues arose when Pyefinch was considered to have made alterations to the telescope tubes provided by The Dollonds and a court case rumbled on. For lack of evidence, Pyefinch was exonerated and immediately took out his own patent. Ironically, it was used by Washington during the campaign against the British and remains in the Mount Vernon collection today.

The above will perhaps provide some insight into the circles into which Pyefinch had gravitated by this point and he very quickly became an instrument maker of some repute. His career however, was somewhat shortlived as he died in 1791. A rare, understated and superbly executed stick barometer from the golden age of scientific instrument making. Jason Clarke Antiques are happy to discuss carriage, condition or for any other queries, alternatively, you can also message us and we will endeavour to come back to you as soon as possible. This item is in the category "Antiques\Science/Medicine\Scientific Instruments".