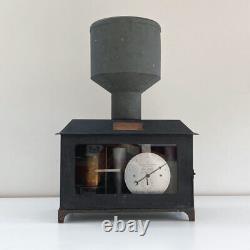 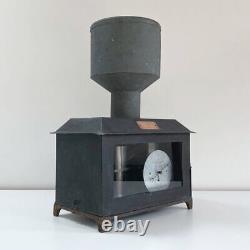 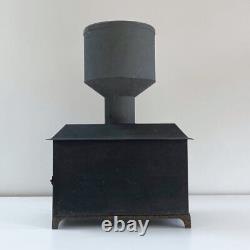 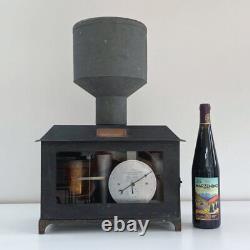 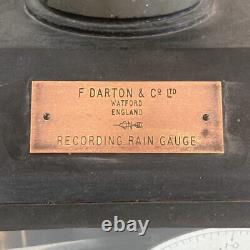 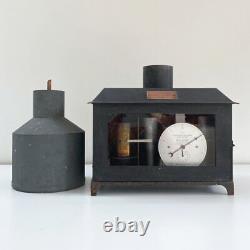 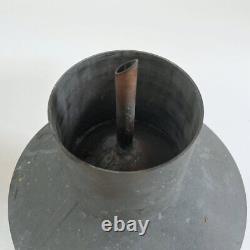 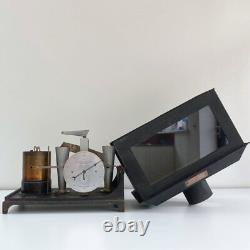 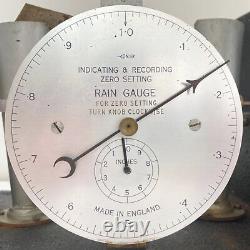 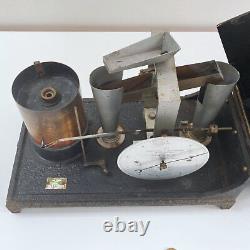 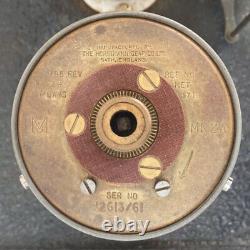 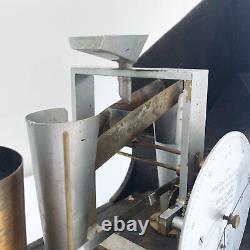 For sale, a Twentieth Century Met Office recording rain gauge by F Darton & Co Limited of Watford. Comprised of a black painted cast iron base with a hinged and glazed cover and large removable funnel positioned on top and a brass maker's plaque stating. Darton & Co Ltd, Watford, England - Recording Rain Gauge. The base is set with a seven day clockwork recording drum marked to the Horstmann Gear Company Limited. The right side of the base is fitted with a tipping bucket mechanism at the rear which captures the rainfall as if filters down from the funnel at the top of the instrument. As each side is filled with rainwater, the effect of weight and gravity will tilt the filled bucket and empty its contents through the accompanying funnels to the floor. The tipping effect will then engage the other bucket to be filled in the other's place.

Attached to the tipping bucket mechanism is a silvered scale which is viewable through the front glass of the case and which has a main and subsidiary dial divided for inches of rainfall. It has the Darton logo to the top and its rather long-winded name of, "Indicating an recording zero setting rain gauge". The mechanism is also attached to a pen arm which allows for the rainfall readings to be transferred to the paper on the recording drum.

The base also has a Darton Serial number tag. Models such as these were advertised by numerous instrument makers of the period, a 1930's catalogue by Heath & Co (by then a subsidiary of Stanley) describes a similar model. Self Recording Rain Gauge or Hyetograph in jappaned metal case. The chart takes the record for a week; it shows one inch of rain for its entire depth, the pen starting at the top and descending as the rain falls.

When the pen reaches the bottom line of chart it automatically rises to the top (the opposite in the case of this Darton example). Parts, the precise amount of rain and exact time it occurred is recorded. The Darton company claimed its establishment date as 1834 during the reign of William IV and many consider that Francis Darton established the company at this time.

It is however more likely that Darton was the successor to the business of a Benjamin Oborne (or Osborne as it is variously used in other texts). Oborne is noted to have attended the then new, London Mechanical Institute from 1831 and must have started trading at around this date from premises in Garnault Place, Spa Fields, London.

From 1843, he moved to Guildford Street East in the same area and then in 1869, moved to 102 St John St in Clerkenwell until his retirement in 1871. This address was to be the first known address for the Francis Darton business and coupled with Darton's birth year of 1850, it is very likely that Darton was apprenticed to Oborne and succeeded to the business following his master's demise. The company, continued to trade from various premises in St John St for the remainder of the Nineteenth Century and by the 1890's, Darton is listed amongst the Fellows of The Royal Meteorological Society. Although I have been unable to find Darton's date of death, he was still alive in 1911 and still working as an optician and instrument maker. It is likely that he retired or died shortly afterwards as by 1916, the company were advertising as F Darton & Co and by 1930 had become F Darton & Co Limited with new premises in Watford. It continued to operate until the last decades of the Twentieth Century where after it was taken over by Russell Scientific.

Russell Scientific have themselves closed in 2022 bringing to a close nearly two hundred years of instrument making history. Jason Clarke Antiques are happy to discuss carriage, condition or for any other queries, alternatively, you can also message us and we will endeavour to come back to you as soon as possible. This item is in the category "Antiques\Science/Medicine\Scientific Instruments".