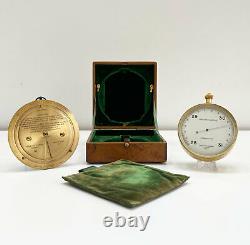 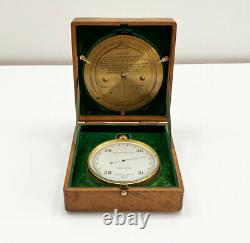 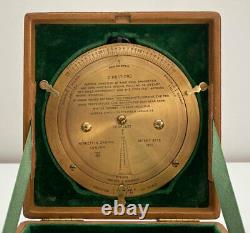 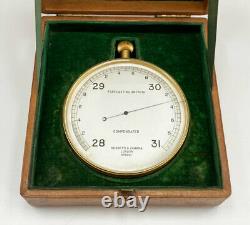 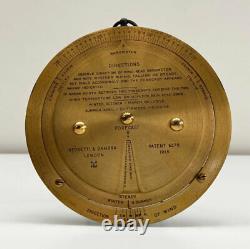 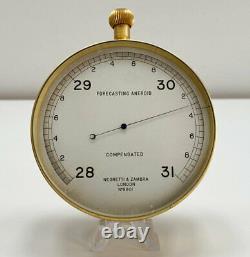 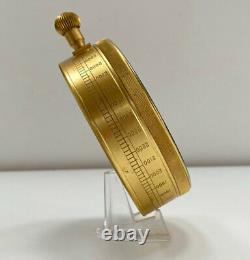 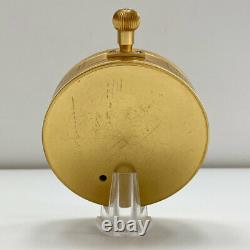 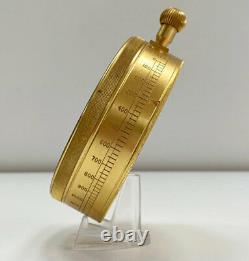 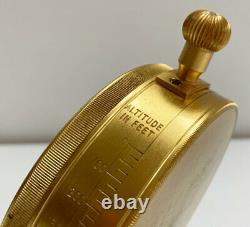 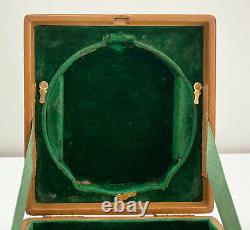 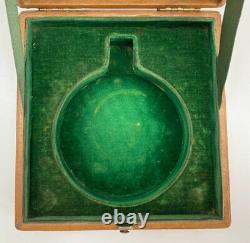 For sale, an immaculate and very scarce leather cased forecasting barometer with brass weather forecaster by Negretti & Zambra. The set is contained within its original pig skin hinged case with push catch to the front. The green velvet interior is fitted to accurately house both instrument in the base and the lid and with an eye to detail retains its original silk velvet cushion that would have lain between the instruments as a form of protection whilst not in use. The base of the case holds a large four inch dial barometer with scale reading for 28 to 31 inches of barometric pressure and an extremely fine blue steel pointing hand. The silvered dial is engraved with Forecasting barometer to the top and below with compensated to denote that the barometer compensates for changes in temperature and the makers name and serial, Negretti & Zambra, London.

The very substantial inch and a quarter deep case is engraved with an altitude in feet scale around the circumference which is operated by loosening the pocket watch type knurled dial at the top which releases the back of the case. The reverse dial can then be adjusted to point to the appropriate height above sea level and in turn moves the barometer hand in order to set it for accurate measurement in the given area of the country in which it is beng operated. Once the adjustment is made, the top screw is then tightened back up. The front face can also be hand adjusting to allow a small pointer incorporated into bezel to be aligned to a given point and record the barometer reading.

This would allow comparison with the succeeding measurement. It retains all of its original gilt lacquer throughout. The lid is fitted with a Negretti patent weather forecaster comprised of three concentric engraved brass rings with instructions for use on the central plate, the weather forecaster provided for the first time an easy means for accurately predicting the weather. The direction of the wind is first set on the outer ring, depending on whether the barometer is rising falling or steady, then the central pointer is used to mark the current barometer reading. The setting of these two positions will then reveal a weather reading in the cut out section on the central plate.

Negretti & Zambras patent weather forecaster was a revelation in its time, the helpful yet somewhat confusing markings produced by Admiral Fitzroy some years earlier had helped to domesticate the barometer into the family home but unless some knowledge and regular discipline in reading the instrument was exerted, the barometer was only ever a current reading of barometric pressure. With this simple yet highly effective tool, the weather could be forecast with a good deal of accuracy in seconds. Combined with its barometer, this set represented the most luxurious offering by the company during the period and at six inches square, rendered this instrument set supremely portable for the travelling weather enthusiast. They are rarely seen today and even more seldom seen in this condition.

Negretti & Zambra were a leading name in the production and retailing of meteorological and scientific instruments and had a company history dating back to 1850 although their parents were amongst those Italian emigres that bolstered the British meteorological instrument making industry at the turn of the century. Throughout their long and esteemed history they exhibited at British and international industrial fairs and became makers to both Queen Victoria and Edward VII. Owing to changes in the business, the firm ceased the public retailing of scientific instruments sometime around the late 1960s and continued with a focus on the aviation industry in numerous guises until its eventual liquidation in the year 2000. They are today perhaps the most collected of the scientific instrument firms which bears testament to the quality of their work.

Jason Clarke Antiques are happy to discuss carriage, condition or for any other queries, alternatively, you can also message us and we will endeavour to come back to you as soon as possible. The item "LEATHER CASED FORECASTING ANEROID BAROMETER WITH FORECASTER BY NEGRETTI & ZAMBRA" is in sale since Thursday, March 4, 2021. This item is in the category "Antiques\Science/Medicine\Scientific Instruments".