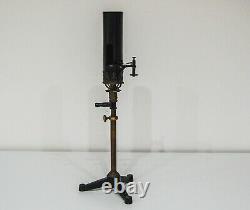 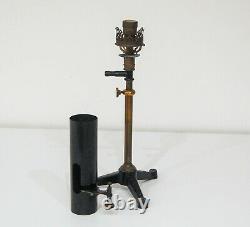 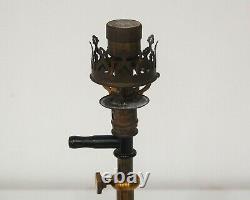 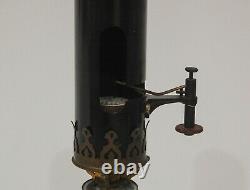 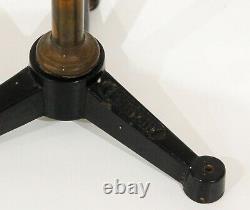 For sale a Late Victorian gas mantle galvanometer lamp by Auerlicht Germany. This uncommon instrument is comprised of a tripod base with a two part extendable column.

The upper part contains an inlet pipe for a rubber gas tube to be attached with air vent collar and ceramic gas burner above. The burner incorporates a decorative brass punched surround into which a cylinder hood with a small cut-out section is fitted. The hood has a pin attached to a swing arm on which a cotton Thorium soaked gauze would be suspended and lit above the burner. The decorative surround is stamped with the brand Auerlicht Prima and a triangle motif with the companys initials DGA inside.

It is also stamped Germany to the base. The gas mantle was invented in the 1880s by the Austrian scientist, Carl Auer Von Welsbach by combining chemicals in order to create a light that burned brighter than any other substance known at that point. His invention was patented in 1885 and in 1890 was improved using a mixture of 99% Thorium and 1% Cerium Oxide impregnated on a cotton gauze. When burnt it produced a white light that was immediately put to numerous uses.

The company Deutsche Gasgluhlicht Aktiengesellschaft was formed in 1892 by Welsbach and Jewish entrepreneur Geheimrat Leopold Koppel with the brand name Auerlicht created in Welsbachs honour. Owing to the effects, the invention was most notably used in street lighting and eventually became the main source of light to almost all European cities during its heyday, however the technology was considered for use in further scientific experimentation. The light emitted would have been usefully adapted in combination with mirror galvanometers for precise readings of electrical current and was also advertised in Max Kohls catalogues of the period as an incandescent gas burner for a reflex galvanometer on tripod and with split cylinder.

The use was perhaps considered by Welsbach himself given that he had studied under the German scientist, Robert Wilhelm Eberhard Bunsen, inventor of the Bunsen burner which produced a colourless flame for use in more accurately determining chemical elements when burnt. Much like Bunsens earlier invention, this example which has obvious similarities in design also includes a brass collar under the burner head which when twisted allows air vents to be opened allowing a gas/air mixture to be introduced. The DGA Company continued to experiment in luminescence, rare earths, radioactivity and uranium and thorium compounds up until the 1930s when (probably owing to its Jewish ownership) it was forced by The Third Reich to sell out to the German Corporation Degussa. Prior to that, alongside its foreign subsidiaries, it had developed the OSRAM light bulb. The company, its scientists and its premises were considered hugely important to both The Russians and The Allies towards the close of World War II and the Director and nuclear scientist Nikolaus Riehl spent ten years in the Soviet Union following the war.

In response, The Allies bombed some of the companys premises where stores of uranium and thorium had been detected in order to avoid them falling into Soviet hands. All of which were precursors to the atom bomb and the subsequent cold war. Jason Clarke Antiques are happy to discuss carriage, condition or for any other queries, alternatively, you can also message me and I will endeavour to come back to you as soon as possible. I have a number of beautiful antiques for sale, so please feel free to browse my other items. The item "LATE VICTORIAN GAS MANTLE GALVONOMETER LAMP BY AUERLICHT GERMANY" is in sale since Tuesday, April 28, 2020.