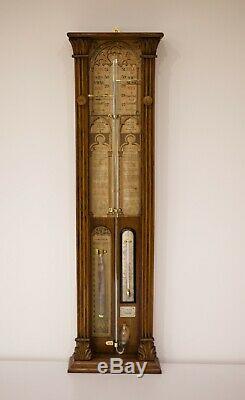 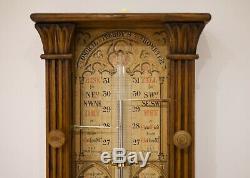 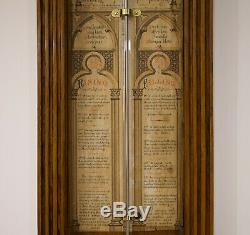 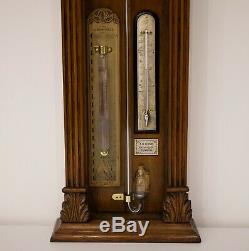 For sale, a magnificent Victorian Admiral Fitzroy barometer by EG Wood of London. Of unusually good quality and style, this late Victorian example is comprised of a beautifully mellowed oak case, carved and fluted pillars either side terminating at top and bottom with stylised acanthus leaf capitols. The upper half of the barometer maintains its original paper label printed in the high gothic style and containing both the scale and instructions on how to read the barometer. The lower half features a thermometer with tear drop bulb on an original bone plated scale on ebonised wood base above the makers plate for Edward George Wood, 74 Cheapside, London.

To the left of the thermometer is an original storm glass (refilled) with gothic paper label intact. Every instrument I have owned by this maker has been of impeccable quality and it shows from the differentiation of case style and the inclusion of the wooden vernier knobs to the front of the instrument in preference to the more commonly associated spring-slider to the side. From 1833 to 1843, Wood seems to have worked alone or with his brothers, Henry & George Wood from premises in King Street and Shepperton Street in London. It is possible that Wood, initially supplied the trade with finished parts for constructing instruments as I can find no examples of his work with the early addresses.

This assumption can be evidenced by recent research by Brian Stevenson through an 1844 newspaper advertisement announcing that Messrs Horne, Thornwaite & Wood have acceded to the business of Edward Palmer, having been assistants and manufacturers to him since his first establishment in Newgate Street in 1837. Palmer was a highly successful instrument maker and retailer of the period.

Given the above, we know that in 1844, Wood entered the successful partnership of Horne, Thornwaite and Wood, trading at Palmers old address of 123 Newgate, London and later expanding into 121 Newgate. The company exhibited numerous devices at The Great Exhibition and won a Prize Medal for photographic equipment. Nothing is known of Woods reasoning but in 1854, the partnership was dissolved with Wood leaving to form a company under his own name, established at 117 Cheapside and the other partners continuing under the name of Horne & Thornwaite where they maintained a successful business, gaining royal approval from Queen Victoria and signing their instruments with, philosophical instrument makers to Her Majesty.

In 1862, Wood moved his business to his better known address of 74 Cheapside and it remained there until his death in 1895. He did however, return to business with his old partners for a brief period in 1886 until 1893 whilst his business of EG Wood was maintained under family ownership. The business seems to have diversified into electrical engineering during its later existence and was finally bought out by Dollond & Co Ltd in 1912. Edward George Wood was an extremely capable instrument maker and inventor, whilst in partnership, he invented the first vertical double magic lantern or biunial for which he is best known but numerous scientific instruments such as barometers, telescopes and of course photographic instruments are known to bear his name. Jason Clarke Antiques are happy to discuss carriage, condition or for any other queries, alternatively, you can also message me and I will endeavour to come back to you as soon as possible. I have a number of beautiful antiques for sale, so please feel free to browse my other items. The item "LATE VICTORIAN ADMIRAL FITZROY BAROMETER BY EG WOOD OF LONDON" is in sale since Monday, March 16, 2020. This item is in the category "Collectables\Scientific Collectables\Scientific Instruments\Barometers". The seller is "jason750_1" and is located in newbury, Berkshire. This item can be shipped worldwide.