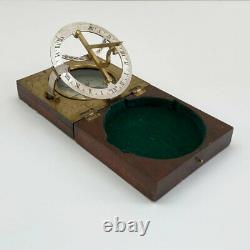 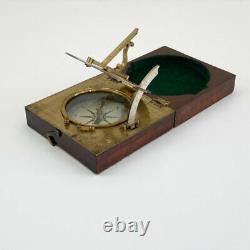 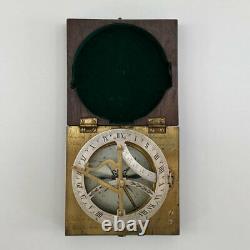 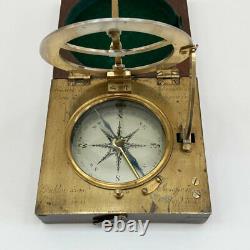 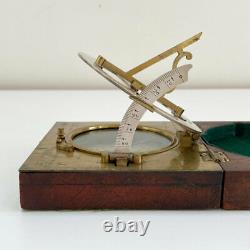 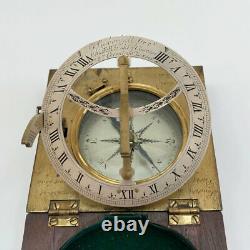 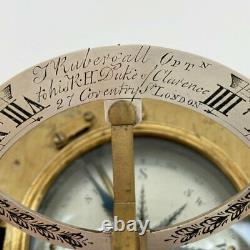 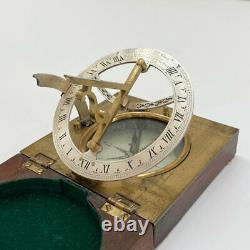 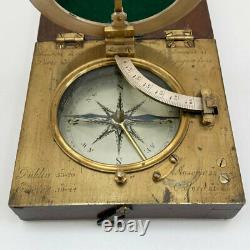 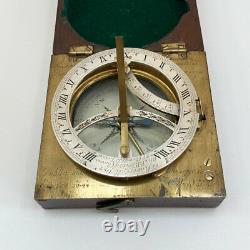 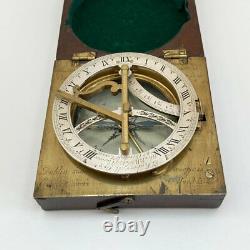 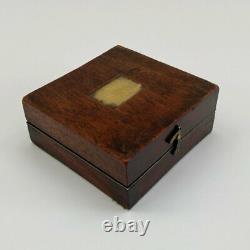 For sale, an early Nineteenth Century mahogany cased pocket inclining sundial by Thomas Rubergall of London. Comprised of a mahogany base with square brass plate supporting an exquisitely engraved and silvered dial compass with compass lock to the front and each corner engraved with latitudes for London, Paris, Lisbon, Glasgow, Dublin, Exeter, Moscow and Oxford. The engraved hour plate bears the makers name of T.

Optician to his Royal Highness Duke of Clarence, 27 Coventry Street, London, and is hinged to the base enabling it to be angled at various latitudes set against the scale on the secondary arm to the side. The gnomon is hinged to the centre of the hour plate and can be turned out for use and lain flat whilst in transit. The lid of the case is fitted in order to incorporate the dial and is covered with green baise for further protection.

The maker Thomas Rubergall was active from 1802 until 1854 in London and traded from three different addresses throughout those 52 years. Princes St, Soho from 1802 to 1805, 27 Coventry Street from 1805 to 1823 and then thereafter to number 24 Coventry Street. Rubergall seems to have been from Huguenot French descent and may be related to earlier well known Chelsea market gardeners of the eighteenth century with the same name. He was renowned enough to have been appointed optician to George III and mathematical instrument maker and optician to the Duke of Clarence (later William IV) and to Queen Victoria. The site of the Rubergalls shop was situated between Piccadilly and Leicester Square.

A superbly executed instrument from one of the most prominent scientific instrument retailers of the first half of the nineteenth century. The dating of this instrument can be reduced to an eighteen year period between 1805 & 1823 which relates to the dates that Rubergall trade from the 27 Coventry Street address.

A super quality instrument by a fantastic maker. Jason Clarke Antiques are happy to discuss carriage, condition or for any other queries, alternatively, you can also message us and we will endeavour to come back to you as soon as possible. The item "GEORGIAN POCKET INCLINING SUNDIAL BY THOMAS RUBERGALL LONDON" is in sale since Tuesday, October 12, 2021. This item is in the category "Antiques\Science/Medicine\Scientific Instruments". The seller is "jason750_1" and is located in newbury, Berkshire.