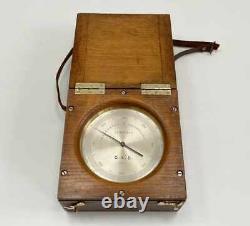 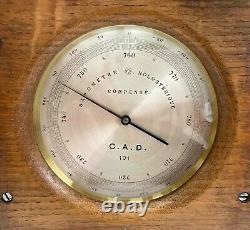 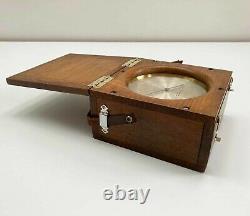 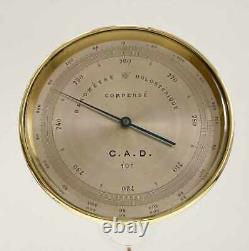 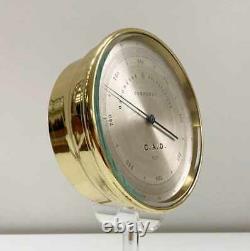 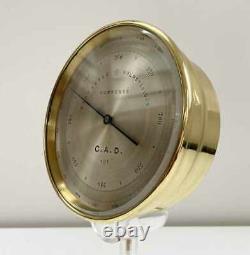 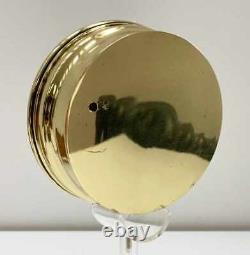 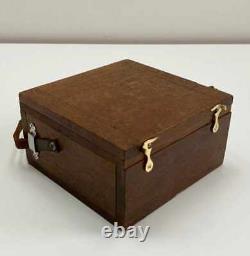 For sale a Late Victorian Cased Aneroid Barometer Altimeter by Pertuis, Naudet, Hulot & Bourgeois (PNHB). Comprised of a wooden case with overlaying wooden frame surround screwed down over the barometer to reveal only the dial, the instrument is further protected with a hinged lid secured by two hooks at the base. Evidently conceived as a portable instrument the case also comes complete with its original leather shoulder strap. Inside the case, the barometer has a brass graduated case and silvered dial with French barometric pressure and altitude scale readings. The centre of the dial is marked with the company's trade mark PNHB logo, Barometre Holosterique (Holosteric barometer) and Compense to denote that it has been compensated for temperature. It is further engraved with the initials CAD and the serial number 101. Its portability, the lack of a hanging loop and the lack of setting hand confirms that this was created purely for field use as an altimeter and similarly designed examples by other makers have been noted engraved for French military use.

It is likely therefore that the CAD engraving is an abbreviation of a French Governmental Department used for surveying. Purposes but to date I have been unable to pinpoint this precisely enough for specific attribution. Nevertheless, an unsual example with an interesting design and nice occasionally to see a PNHB aneroid barometer manufactured specifically for the French market. The company was formed in 1860 by the above named partners and they quickly rose to become one of the largest manufacturers and exporters of aneroid barometers in the world.

Their early export success may be related to their exhibiting at the 1862 London Exhibition where they are listed under Volume 3 - The Colonial & Foreign Division and it is likely that the company garnered numerous business relationships as a result. Examples of their barometers are numerous amongst the wares of all of the best scientific instrument makers of the day. Negretti & Zambra were also importing and retailing the company's barometers as well as making their own.

Interestingly, the company was listed at the exhibition as Naudet & Co (Cie in French), so it is also likely that the initial partnership was broken up in some way within two years, leading to the convenient (for Naudet at least) belief that the PNHB makers stamp really stood for "Paul Naudet Holosteric Barometre". However, there are a number of confusing factors that suggest that not all partners left the concern. In 1867, "Naudet, Hulot & Cie" are referenced in the, "Bulletin de la Societe D'Engouragement pour L'Industrie Nationale" after receiving a medal for their enhancements to Monsieur Vidi's design (the patent had fallen into the public domain in 1859) through their "Holosteric Barometers". The company's 1891 catalogue continued to reference this award, printing the Society's report in full but at this stage, the catalogue states the business name as, "Naudet & Cie" but with the line below stating "Pertuis & Fils" in larger text proving that Pertuis also continued to have a stake in this highly successful enterprise. We can only surmise at this stage but it would suggest that Hulot and Pertuis maintained some kind of relationship with Naudet until the end of the Nineteenth Century and Bourgeois was the only partner to have left the company in its the early period.

It is certain however that further research is required to untangle this complicated partnership arrangement. Survival of the company through the Franco Prussian war and the First World War is evidenced through the existence of their catalogues but in 1928 it seems that the company had moved out of the original owner's hands and had been bought out by a company named Dourde. Like many English scientific instrument makers, the new owners had sought to maintain the goodwill and customer base built up by Naudet and their catalogue's front page is dual named to "Maison Naudet" and "Dourde successeur". Unlike many of its kind, Naudet (or Naudet Dourde) still exists and continues to make new barometers today even winning the "Enterprise du Patrimoine Vivant" award in 2016.

They primarily trade under the Naudet name, so much so that the Dourde name is not incorporated into their branding on their website or on their instruments. A testament to the strength of reputation that this company created in the Nineteenth Century. Jason Clarke Antiques are happy to discuss carriage, condition or for any other queries, alternatively, you can also message us and we will endeavour to come back to you as soon as possible. This item is in the category "Antiques\Science/Medicine\Scientific Instruments".