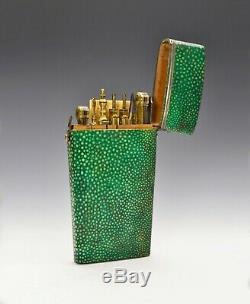 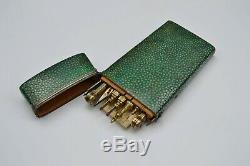 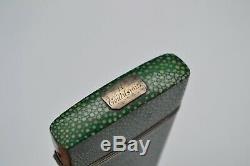 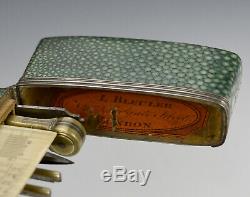 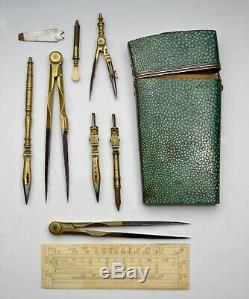 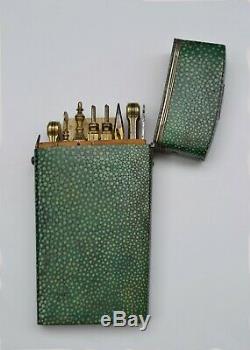 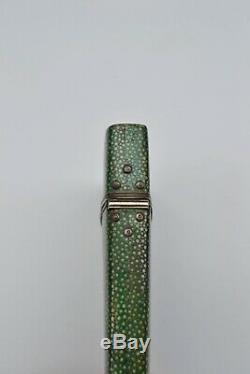 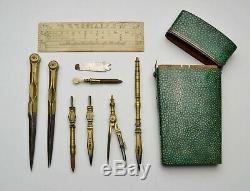 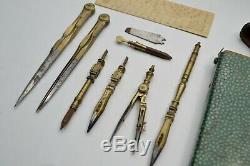 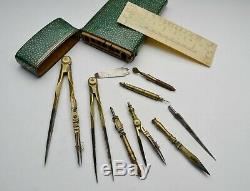 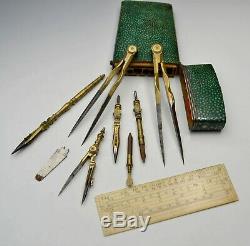 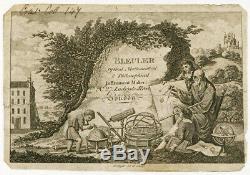 Brass and steel drafting set in a fine silver-mounted shagreen pocket case. Label inside the lid reads I. Silver name plate on the top of the lid is engraved H. Complete with 9 matching instruments including compass with complete extensions, matching dividers, brass mounted pencil, fine pen with removable pricker, steel key for tightening dividers, and ivory protractor. All instruments feature steel butterfly thumbscrews typical of the period. Set may have belonged to English artist Harriet Gouldsmith (17871863). She was a landscape painter and etcher and one of few female artists in the period to show at the Royal Academy.

She was a pupil of William Mulready and through him met John Linnell, who influenced her work. She first exhibited in 1807 at the Royal Academy and continued to show there until 1859. She also exhibited at the Water Colour Society, of which she was elected a member in 1813, the British Institution, and the Suffolk Street Gallery. She was said to be an expert etcher and lithographer who drew on stone for lithographer (Charles Joseph) Hullmandel. He apprenticed to Henry Raines Shuttleworth of the Spectacle-makers Company in 1771, becoming free of the Company in 1779.

Following his apprenticeship he worked at Shuttleworths address at 23 Ludgate Street, then established himself at 27 Ludgate Street around 1790. See his trade card in the image gallery. The item "Fine Silver-Mounted Shagreen Drafting Set By Bleuler, London" is in sale since Saturday, April 4, 2020. This item is in the category "Antiques\Science & Medicine (Pre-1930)\Scientific Instruments\Other Antique Science Equip". The seller is "instrumentumantiques" and is located in Los Angeles, California.