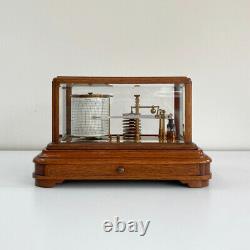 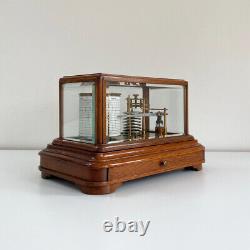 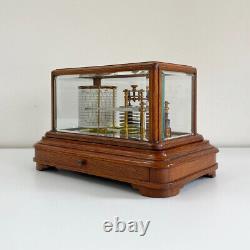 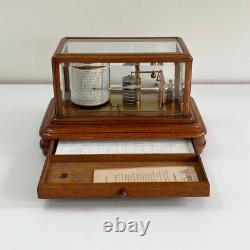 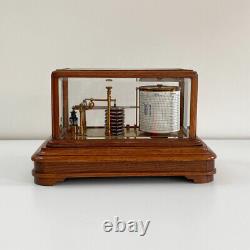 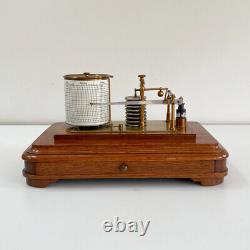 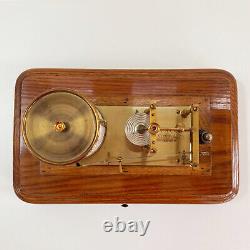 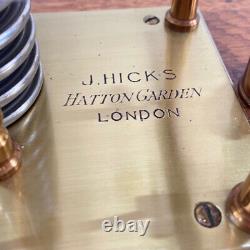 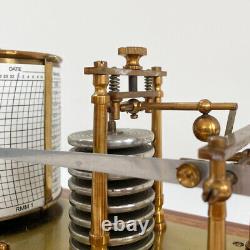 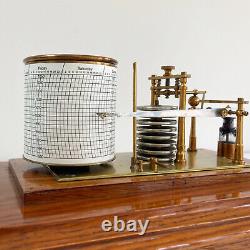 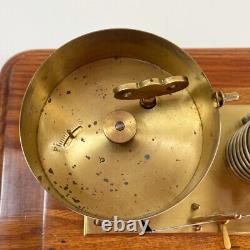 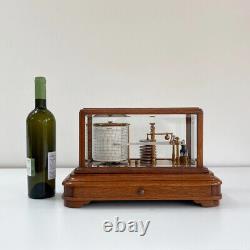 For sale an impressive Edwardian golden oak barograph by J Hicks of Hatton Garden London. This splendid and robust design was particular to the workshops of Hicks, it sports a robust, graduated base with smooth rounded edges and a draw at the front for storage of charts.

The top is fitted with a brass, gold plated base plate on to which the movement is attached. The mechanism is comprised of a clockwork recording drum with speed adjustment lever and original key under the top lid, a generous eight chambered vacuum capsule stack (or bellows) connected to a counterbalance and pen-arm spindle and of course the pen arm at the front for marking the paper with the associated pressure movements on the drum. A brass knurled screw above the bellows allows for adjustment of the pen arm to align to current pressure at a given position. The lid is formed from a similarly styled oak frame with graduated base which aligns perfectly with the base section.

It is glazed on all five sides with thick bevelled edge glass panes. The maker, James Joseph Hicks was born in Cork, Ireland in 1837 to a poor farming family and was sent to London for schooling. He was apprenticed to the famous Louis P Casella where he remained until 1861. In that short time he had already risen to become Casella's foreman, showing just how able the young Hicks was. Highly skilled in the development and the improvement of scientific instruments, Hick's business was large enough by 1880 to have over 300 employees on the books.

A shrewd marketer, he was present at eight Royal Society Exhibitions during the period, 1876 - 1913 and extended his reach overseas by attending numerous world trade fairs. He won a gold medal at the 1900 Paris exhibition. In 1910 at the age of 73, he successfully negotiated a merger between his company and the equally famous WF Stanley and remained a director of the company that retained his name until his death in 1916. During his life he established a near monopoly on clinical thermometers leading to Hick's being dubbed, "King of the Clinicals". A truly magnificent example of its type.

Hicks was a maker of extraordinary talent and this instrument bears testament to his skills. A fine example in superb order both mechanically and aesthetically. Jason Clarke Antiques are happy to discuss carriage, condition or for any other queries, alternatively, you can also message us and we will endeavour to come back to you as soon as possible. This item is in the category "Antiques\Science/Medicine\Scientific Instruments". The seller is "jason750_1" and is located in this country: GB.