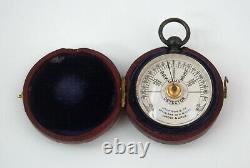 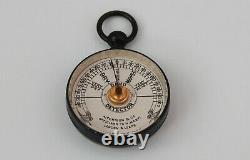 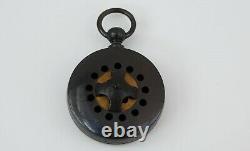 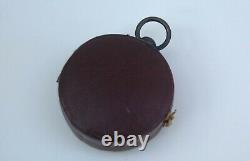 For sale, an Edwardian cased pocket damp detector or pocket hygrometer retailed by Aitchison & Co of London & Leeds. The one and a half inch ceramic dial has an indication scale ranging through very dry to very damp and states, Aitchison & Co Opticians to HM Govt, London & Leeds which is written to the base. Unusually, the hygrometer remains with its original case and like the instrument itself, remains in near perfect condition and would have been retailed by Aitchison in London or in its regional Leeds branch. The naming of the Leeds branch is useful for dating purposes as this branch did not open until 1905. The fear of cold and flu was a tangible concern at the time and these pocket damp detectors were recommended for use in an 1889 publication named, Suggestions to mothers on the management of their children to ensure that healthy standards were met.

Due to their portability, they are also considered to have been used for travelling purposes and the testing of hotel linens and overnight facilities for similar reasons. Aitchisons firm was founded in 1889 at 47 Fleet Street, he undertook his apprenticeship with an opticians firm in High Holborn before setting up in business initially with Alexander Thomas Clarkson (of Broadhurst Clarkson fame). He is said to have been uncomfortable with the very basic methods that his previous employers used to examine and test patients eyes and in a time where glasses were becoming common place across all classes in Britain, he quickly carved himself a niche for supplying very good, high quality lenses at reasonable rates which appealed to the varying pocket sizes providing the public with gold, silver and steel frames for spectacles, lorgnettes, monocles and pince-nez. Given his reasoning for leaving his previous employment, the subject of standards within the industry continued to be an issue close to Aitchisons heart, the Worshipful Company of Spectacle Makers was, by then, purely a means of apprenticeship and for gaining practical skills in manufacture rather than for gaining an understanding of the science of optics.

They showed little interest when in 1890, Charles Hyatt-Wolf proposed changes to the process which would include examination and certification and having received his re-buff, Wolf sought to organise a separate body to try to tackle the standards of practice. The journal The Optician was created in 1891 and in 1895 when Hyatt-Wolf created The British Optical Association (BOA), Aitchison was an enthusiastic founding member and supporter. By this time, he had dissolved his partnership with Clarkson (Gazette 1891) and opened two further branches at 6 Poultry (close to Robert Brettell Bates old premises) and at 428 The Strand. Little is known of Aitchisons early partnership, Clarkson had owned his own company since 1873 which seems to have remained distinct throughout.

As a result or as a precursor to the decision, Robert Henry Broadhurst joined Clarkson in 1892 and went on to form an equally famous partnership. The Spectacle Makers Company were slow to respond to pressure but in 1898 they began an initial set of examinations which were regarded as unsatisfactory by the BOA and with the efforts to align their activities failing, the BOA brought out its own set of examinations later in the same year. Luckily for the students, the newly built College of Advanced Technology catered for both courses and The Spectacle Makers Company agreed to fund its tutors for the first two years. Aitchison was amongst the first of The BOA members to undertake its tests but by 1899 had become unimpressed by both The Company and The Association and set out to create The Optical Institute (later, the Optical Society). For this he garnered the support of William Thornwaite RS and numerous other leading minds.

Aitchison aside from his evangelical approach to the education and qualifications of his industry, was also somewhat evangelical about the effects of poor eyesight on health and along with a shrewd understanding of marketing, he advertised widely, using health benefits as a means of getting the public through the door. The periods of the war from the Boer War to the First World War were also of commercial importance to Aitchison & Co and their Range finding binoculars and See in the dark glasses were subject to a huge order from the Imperial Russian Government for use in the Russo-Japanese War. By 1908, the company had added two further London branches at 12 Cheapside and 281 Oxford Street and had opened a regional branch in Leeds. Aitchison had also found the opportunity to write a book on the subject, Eyesight Preserved Some Useful hints on the Eyesight. It is unsurprising given the above that James Aitchisons life did not continue into contented old age, he died suddenly in 1911 at the age of 51 by which time he had been central to both the reformation of the optical industrys educational programmes and also to the popularising and naturalising of spectacle wearing across Britain by his widespread (and sometimes criticised) use of advertising.

The demise of Aitchison at such a young age left his son Irvine, a 23 year old law student heading up a large company, however he had enough foresight to employ his fathers friend and business partner, Arthur Bernard Clark to be joint Managing-Director. The impending war years were to have a devastating effect on the optical industry due to the huge reliance it had on the German lens manufacturers in Jena but through its sales to the War Office and its reputation, the company managed to persevere.

Their branches also contained stocks of barometers, thermometers, pedometers, map measurers, microscopes, linen provers and damp protectors to bolster sales. Sadly, their soon to be partner Dollond was not coping quite as well, their reputation was still renowned but through lack of good accounting practices and bad organisation, they were close to failure. In 1925, exploratory conversations began between Dollond and Aitchison and finally on the 31. Of August 1927, Aitchison finally acquired the goodwill, stock and leases of Dollond & Co and the new company of Dollond & Aitchison was created.

Irvine Aitchison continued to run the business until his death in 1965 and since his son Peter had died in 1947 whilst taking part in the notorious Isle of Man TT race, the company continued thereafter without a family connection to either the Dollond or Aitchison families. It continued to prosper however and was a recognisable feature across many British High Streets until 2009 when it was finally bought out by Boots the Opticians. A superb example in near perfect condition.

The item "EDWARDIAN CASED POCKET DAMP PROTECTOR OR HYGROMETER BY AITCHISON & CO OF LONDON" is in sale since Monday, May 20, 2019. This item is in the category "Antiques\Science/Medicine\Scientific Instruments". The seller is "jason750_1" and is located in newbury, Berkshire.