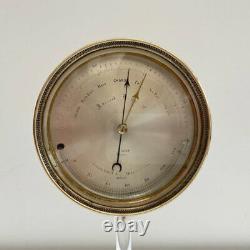 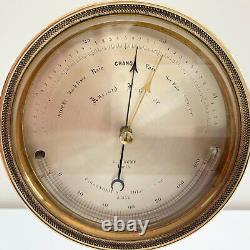 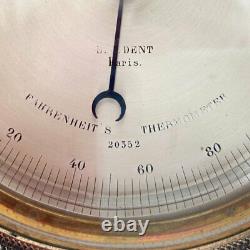 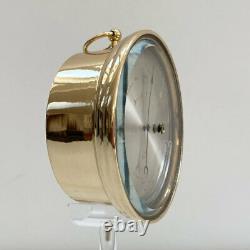 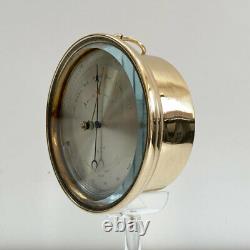 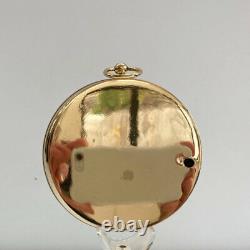 For sale an early Lucien Vidi brass cased aneroid barometer retailed by EJ Dent. This early barometer has a 4.5 inch silvered dial and curved Fahrenheit thermometer to the bottom section. The dial is engraved with the words, "aneroid barometer" to the top and "Fahreheit's thermometer" to the bottom above the serial number "20352". Below the set dial is engraved the retailers name, "EJ Dent, Paris". The weather indications are standard for Vidi barometers and are the predecessor to the later Admiral Fitzroy readings that are more commonly seen today.

The mechanism is enclosed in a quality pressed brass case and machne turned bezel. The maker, Lucien Vidi (1805 - 1866) was a French Physicist who invented the aneroid barometer in 1843 and held the patent rights for his invention until 1855.

Until Vidi's ground-breaking invention, barometric pressure was always read by means of a mercury tube such as can be seen installed in stick or wheel barometers, however their portability made them difficult to use for field experiments. The aneroid (meaning without liquid) had been considered as a possible solution since the seventeenth century by the likes of Gottfried Wilhelm Von Leibniz and Nicolas Conte, although neither had any practicable success.

Vidi, was born in 1805 in Nantes and initially trained as a lawyer but left the industry in 1830 to follow a career in steam engineering and much like his competitor, Eugene Bourdon, saw the requirement for improvements to steam pressure gauges which at that period utilised mercury. By 1843, Vidi had succeeded in manufacturing a metallic barometer which consisted of a metallic corrugated disc with the air exhausted from within it and before his eventual patent (no: 10157) in October 1844, he, (on the advice of Pierre de Fontainmoreau) approached the retired English optician, Andrew Pritchard to manufacture and test his invention. During testing, his device was taken to the top of St Paul's Cathedral dome in order to measure height by means of changes in barometric pressure and was certified as a complete success by Pritchard & Fontainmoreau shortly after. On returning to France in 1845, Vidi ordered the manufacture of 100 instruments from the leading French watchmaker, Redier of Paris but was unhappy with the quality and refused to take receipt of the product. Vidi was successfully sued by Redier and so Vidi afterwards began to manufacture the instrument in his own workshop although initial sales failed to materialise, perhaps due to the negative publicity of the legal case against him.

It is unusual given his initial journey to Britain that Vidi did not begin manufacture in the UK but given the poor reception of his invention in France, he again travelled to London and managed to secure a deal with the famous clockmaker EJ Dent to retail them on his behalf. Initially sceptical, Dent was persuaded when a British naval officer bought an example and promptly ordered thirty more. Nearing bankruptcy at this point, he is thought by Vidi's biographer, Auguste Laurant, to have gone on to supply Dent with five thousand examples in the first few years whilst his sales in France numbered less than one hundred pieces. Throughout the 1840's in Britain, Vidi's device faced detailed scrutiny against mercurial barometer readings which were found to be identical and to establish the portability of the device and its usefulness as an altimeter it was also taken on numerous train journeys, namely, London to Chester in 1848 and from Preston to Carlisle. The Royal Observatory also undertook tests at varying temperatures and found little difference between the aneroid and it mercurial counterpart.

A Fellow of the Meteorological Society who took part in these investigations is quoted as saying. We found the movement of the aneroid was always consistent. It was a delightful companion and highly useful, its indications preventing many an excursion which would have ended in disappointment.

The tourist should never travel without it; and the seaman will find it a safe guide when the motion of the mercurial column renders the marine barometer almost useless. In all cases the writer has used the aneroid as its inventor intended it should be used; and its movements are so far perfect, that they merit the calm and impartial investigation of the true philosopher, whose vocation is to aid the development of ingenuity, and not to crush its efforts because they are not perfect.

In 1849, Sir George Biddell Airy, Astronomer General at Greenwich also undertook detailed analysis of the aneroid barometer's readings and is quoted as saying. I do not perceive that the differences follow any law depending on the height of the barometer, or on the height of the thermometer, or on their changes. I think that, upon the whole, the reading of the aneroid barometer has diminished a very little with time, but the apparent diminution is so small that its existence is very uncertain.

In the same year, Vidi's business partner, EJ Dent published,'A Treatise on the Aneroid, a Newly Invented Portable Barometer' which greatly aided the sales of the instrument. His commission for manufacturing the famous Westminster clock, Big Ben no doubt had a positive effect on Dent's sales in general too. Again, in 1849, another historic clockmaker, Charles Frodsham is also known to have written a treatise on the instrument and his,'A Few Remarks upon the Construction and Principles of Action of the Aneroid Barometer with Observations on the Mercurial Barometer' describes Vidi's barometer in detail. He is noted as having used instruments, 987, 1013, 1386, 1608 and 1613 for the purpose of his trials and from this information, we can therefore reasonably assume that all instruments prior to serial 1613 were manufactured in 1849 or before. In 1851, Vidi also exhibited his new barometer at The Great Exhibition in London at the same time as his competitor Eugene Bourdon, both of whom won a Council Medal for their barometers. The case was closed in Bourdon's favour in 1852 and a subsequent appeal also proved unsuccessful for Vidi. The case finally went to France's highest court in 1853 which again ended unhappily for Vidi although after finding a means to re-open the case, he was finally awarded 25,000 Francs in damages which was reduced in 1861 to 10,000 Francs. With his patent period expiring in 1855, Vidi's attempts to extend his patent were refused and thereafter a number of British and French manufacturers began to retail his mechanism on a wide scale.

Numerous examples of the Vidi barometer exist on the market by such famous French makers such as Dubois & Casse and Naudet. In the UK, Negretti & Zambra were also heavily involved with developments to the aneroid and worked closely with Admiral Fitzroy.

It must certainly have been a difficult period for Vidi, it is uncertain how much he profited from his monumental invention after his near bankruptcy but the history suggests that the effort exerted may not have been as profitable as it could have been for him. Vide eventually died in 1866, it is thought through his excessive use of hydrotherapy. His English business partner Edward John Dent died sometime before Vidi in 1853 leaving his greatest commission (Big Ben) unfinished. His step sons, Richard & Frederick eventually completed the work although Richard died of brain disease in 1856. After this time, the company was renamed to Frederick Dent.

EJ dent was himself a significant figure in the clock-making industry of the period, he specialised in the manufacture of marine chronometers and submitted numerous examples to the Admiralty for testing during his life. He is also noted for his invention of the dipleidoscope, an instrument for determining the point of true noon without the aid of a timepiece. His life's work is perhaps less relevant to this piece but nevertheless Dent's name is hugely significant in the marketing and popularising of the aneroid barometer following its invention.

His fame and notoriety helped to make it a must have household item during the Victorian period and those instruments bearing his name are the earliest examples of the Vidi pattern that exist and certainly the early examples can be considered to emanate from Vidi's own workshop. They are therefore historically important pieces and gave birth to the pattern that we recognise today. The serial of 20352 on this piece reflects just how popular these instruments became. Manufacture rates are considered to have been around 5000 in the first few years of the partnership so it is rational to suggest that demand increased. Given the serial, this example is likely to have been produced towards the end of the partnership in or around 1850 - 1853.

The company of EJ Dent underwent a name change after his death so it provides a level of reliability when it comes to dating. This example has lost a small amount of its blacking to the engraving and the spirit thermometer although working has lost its original red colouring due to exposure to light over time. This is a common feature of old Dent barometers and remains as a sign of originality. An EJ Dent barometer is a must have example for any serious collector of aneroid barometers. Jason Clarke Antiques are happy to discuss carriage, condition or for any other queries, alternatively, you can also message us and we will endeavour to come back to you as soon as possible.