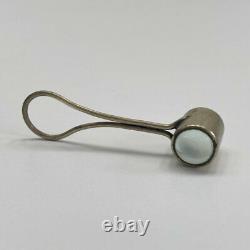 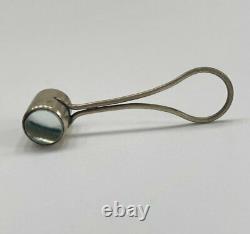 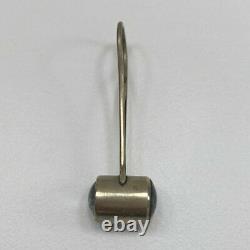 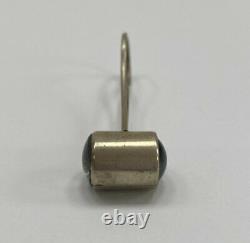 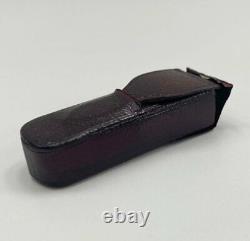 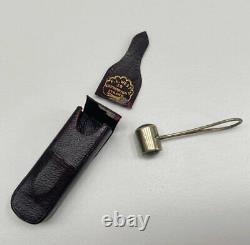 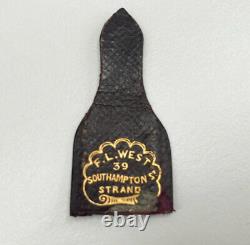 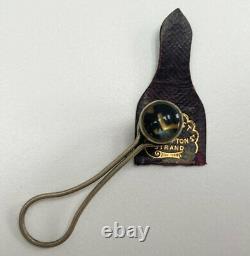 For sale, an early Victorian cased Stanhope lens by Francis Linsell West of 39 Southampton Street, The Strand, London. The Stanhope lens so called because it was considered to have been invented by Charles, The Third Earl Stanhope, is a simple microscope comprised of glass cylinder with two convex ends and which could be used for rudimentary scientific investigation. It was popularised due to its easy accessibility to the public in a period when microscopy was a growing phenomenon.

Enclosed in a German silver collar and loop, this example comes complete with its original card & morocco leather covered case. It is further marked to "FL West, 39 Southampton St, Strand, London" in gilt lettering to the inside of the lid. Francis Linsell West was apprenticed and later worked under his Father, Francis West who largely popularised the Stanhope lens from his premises in Fleet Street.

West the elder was an enterprising character who during his career, demonstrated himself to be an adept marketer as an early advert for the lens in the Comic Almanack of 1836 shows. Christmas - I tell you what? The prettiest trinket and decidedly the most useful present you can make at this season is.

WEST'S IMPROVED STANHOPE LENS. It is mounted to be worn like an eye glass, in gold, silver or metal; will suit every sight, and has the uses of the microscope without the trouble of adjusting. Observe, the genuine can only be procured of the original maker, Francis West late Adam's, Optician to His Majesty, 83 Fleet Street, or through any of the London Booksellers.

The name "West Inventor" is stamped on the genuine instrument. West quite clearly had a flare and an appreciation of the power of the advert and his reference to the Adam's family seems to be somewhat fantastical given that Dudley Adams had entered bankruptcy proceedings some twelve years prior to West opening his business in 1828. It is likely that the Fleet Street connection was good enough reason for him to also shoe-horn the use of Adams's Royal Appointment into his literature. His son Francis Linsell was apprenticed in 1835 so must have worked with his Father until 1849 whereupon he took up premises at Southampton Street. His Father is considered to have continued trading until 1852 so it is likely that Francis Linsell was merely expanding and taking over the family business as he is also noted as trading from 31 Cockspur Street and Fleet Street. The firm continued to produce and retail an array of scientific instrument and although not listed at The Great Exhibition, he ranked amongst the exhibitors at The 1862 Exhibition where he is mentioned for barometers. He was also by this time a member of The Spectacle Maker's Guild.

The Stanhope lens remained a popular phenomenon beyond his Father's career and West contined to support the invention with a pamphlet outlining the complete directions for its use. He ran the business until 1885 and there is no indication that it continued after that point, therefore it is reasonable to assume that the company was dissolved upon West's retirement. A scarce piece and perhaps a little more unusual to encounter one from FL West. The case lid is of course sadly detached but it remains complete and the instrument itself is in super condition.

Jason Clarke Antiques are happy to discuss carriage, condition or for any other queries, alternatively, you can also message us and we will endeavour to come back to you as soon as possible. This item is in the category "Antiques\Science/Medicine\Scientific Instruments". The seller is "jason750_1" and is located in this country: GB.