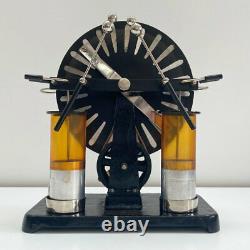 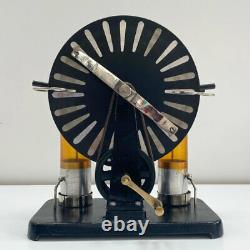 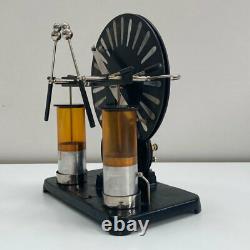 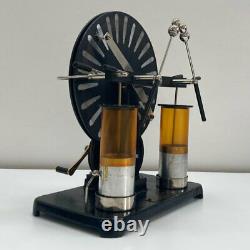 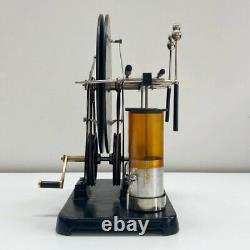 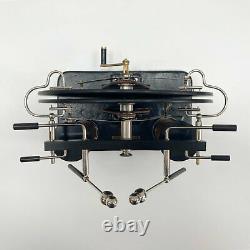 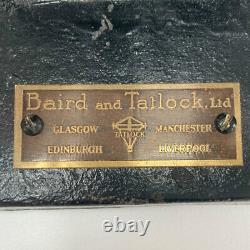 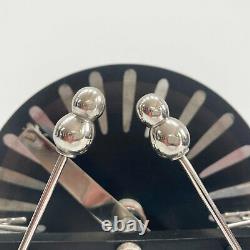 For sale, an Early Twentieth Century Wimshurst Machine by Baird & Tatlock. The Wimshurst influence machine or electrostatic generator was developed by the British inventor James Wimshurst between 1880 & 1883. The machine has a cast iron base with two eight inch contra rotating ebonite discs with 24 foil sectors attached to the front of each. By turning the handle electrostatic charge is sent to the two glass Leyden jars which sit either side of the base.

Once enough charge has been stored within the jars a spark is released between the two brass nodes to the front of the machine. The base has a brass plate, with makers name Baird & Tatlock with central company logo and a list of premises at Glasgow, Edinburgh, Manchester & Liverpool. The inventor, James Wimshurst was the Chief Shipwright Surveyor for Lloyds of London but dedicated his spare time to scientific experimentation. Widely known for his experiments with electricity, he became a member of the Institute of Electrical Engineers in 1889 and was elected a Fellow of the Royal Society in 1898. The firm of Baird & Tatlock was founded in Glasgow in 1881 by Hugh Harper Baird and John Tatlock.

Both men seemed to have trained in laboratory equipment production but notably Tatlock had previously been the private assistant of Professor William Thompson (later Lord Kelvin). Initially situated at 100 Sauciehall Street in Glasgow, the company profited from the huge surge in popularity of scientific teaching in Victorian Britain and specialised in laboratory furnishing for schools and research establishments. By the end of the decade, they had moved to larger premises in Renfrew Street and further premises were opened in London.

The latter occasion marked the departure of Hugh Harper Baird to the capital in order to manage the companys interests there. During the 1890s the company attained contracts for numerous Governmental organisations including the Admiralty, the War Office, The General Post Office and various Colonial Departments but by 1896 the pair agreed to dissolve the partnership, leaving Baird in sole ownership of the London business which became Baird & Tatlock (London) Limited and Tatlock retaining the concerns in Glasgow.

A year later, Tatlock opened further premised in Edinburgh, in 1904 he extended the Glasgow firms reach to Liverpool and a further branch was opened in Manchester in 1911. By this point, both original partners had died (Tatlock in 1909 and Baird in 1911) and the latter occasion perhaps prompted the move by the Glasgow company to register itself under the name of Baird & Tatlock Limited, a move which ensued in legal action from the London Company. The legal action was however unsuccessful and the confusion was only resolved in 1925 when the Scottish company was merged with John J Griffin & Sons Ltd whereafter it was renamed as Griffin & Tatlock. A further merger with W&J George & Becker in 1954 saw a final name change to Griffin & George and under this guise, the company continued to trade in scientific apparatus until 1999 when it finally shut its doors.

This superb working example can be dated quite specifically due to the plate attached to the base. With the advertising of its premised in Glasgow, Edinburgh, Liverpool & Manchester, the earliest date of manufacture must have been after the Manchester branch opened in 1911 and with the subsequent merger with Griffin in 1925 it results in a very clear period of fourteen years between 1911 to 1925. Jason Clarke Antiques are happy to discuss carriage, condition or for any other queries, alternatively, you can also message us and we will endeavour to come back to you as soon as possible. The item "EARLY TWENTIETH CENTURY WIMSHURST MACHINE BY BAIRD & TATLOCK" is in sale since Monday, June 7, 2021. This item is in the category "Antiques\Science/Medicine\Scientific Instruments". The seller is "jason750_1" and is located in newbury, Berkshire. This item can be shipped to United Kingdom.