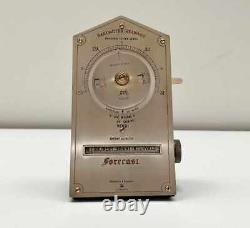 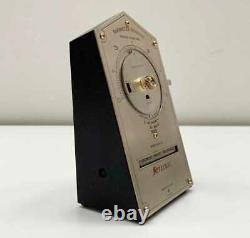 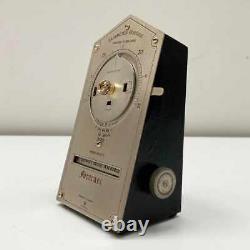 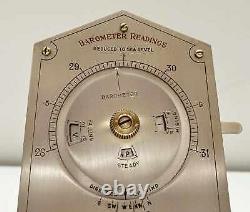 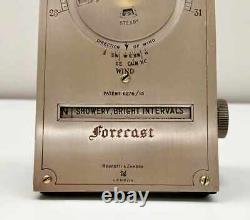 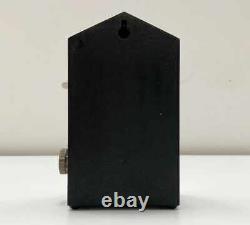 For sale, an early Twentieth Century Desk Weather Forecaster by Negretti & Zambra. Comprised of a black painted metal case with a silvered brass and engraved front plate, the dial contains a barometer scale with hand turned indicator and a secondary dial operated by means of a side lever to set the current wind direction. With both indicators set for the current conditions, the central dial will reveal three different letters, which depending on the prevailing conditions, can be read on the turn dial below. The words rising, falling and steady relate to the movement of the barometer, ie whether it has risen, fallen or remained the same since the previous day's reading. Depending on those circumstances, the correct letter is chosen and using the side dial below the main scale, the appropriate letter is located to provide your weather forecast for the ensuing 12 hours. Patented by the firm in 1915 (Patent No: 6276/15) these forecaster proved extremely popular during the period and were produced in numerous versions including a small pocket sized example. A truly ingenious meteorological instrument, it allowed the armchair meteorologist the ability to predict weather conditions with significant ease. It was also a very shrewd marketing move by Negretti & Zambra by making the barometer more approachable to the novice.

The weather indications on a standard barometer are very often inaccurate when compared to outside conditions owing to the fact that they only measure air pressure. With the combination of the varying factors included on this simple but deceptively complex desktop instrument, it made the process of domestic weather forecasting a much more accurate and simple process and it remains just as useful to those interested in weather forecasting today. Negretti & Zambra were a leading name in the production of meteorological and scientific instruments and had a company history dating back to 1850 although their parents were amongst those Italian emigres that bolstered the British meteorological instrument making industry at the turn of the century.

Throughout their long and esteemed history they exhibited at British and international industrial fairs and became makers to both Queen Victoria and Edward VII. Owing to changes in the business, the firm ceased the public retailing of scientific instruments sometime around the late 1960's and continued with a focus on the aviation industry in numerous guises until its eventual liquidation in the year 2000. They are today perhaps the most collected of the scientific instrument firms which bears testament to the quality of their work.

Jason Clarke Antiques are happy to discuss carriage, condition or for any other queries, alternatively, you can also message me and I will endeavour to come back to you as soon as possible. I have a number of beautiful antiques for sale, so please feel free to browse my other items. This item is in the category "Collectables\Scientific Collectables\Scientific Instruments\Barometers". The seller is "jason750_1" and is located in this country: GB. This item can be shipped to United Kingdom.