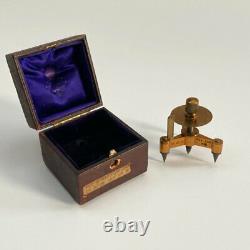 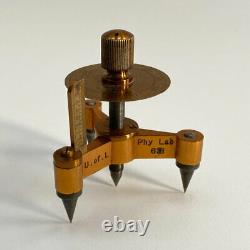 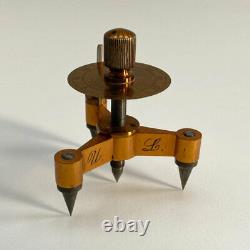 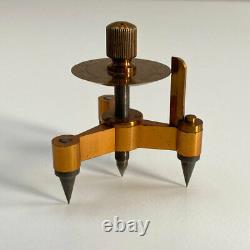 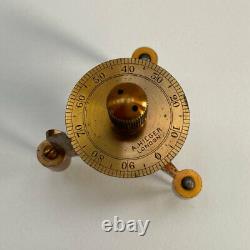 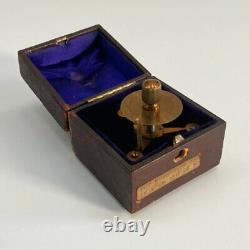 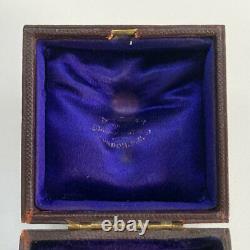 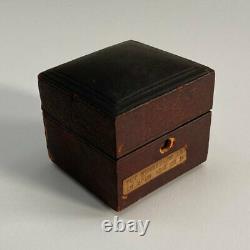 For sale an early Twentieth Century morocco cased spherometer by Adam Hilger. The spherometer as the name implies, was used in this instance for measuring the radius of curvature of optical lenses. The instrument was originally conceived by the famous French scientist and Optician, Robert-Aglae Cauchoix for the purpose of grinding lenses and curved mirrors. This instrument is comprised of three pointed legs forming an equilateral triangle.

A central leg is provided on a screw which can be raised or lowered to make contact with the subject glass at the centre. The central scale plate surrounding the screw and the vertical scale which is placed alongside the plate can then be used to determine the difference in curvature between the outer legs and the central leg. This fascinating instrument is engraved to A. Hilger, London to the brass plate and further marked to, "U of L Phys Lab" denoting its use by the University of Liverpool at some stage in its existence.

It comes complete with its original morocco leather fitted case with purple velvet and silk interior. The company of Adam Hilger was established by Johann Adam Hilger, a German immigrant scientific instrument maker who had settled in London.

Hilger died in 1897 leaving his brother Otto in charge of the business and Frank Twyman joined a year later. Twyman would succeed as manager of the company in 1902 upon Otto's death and it was incorporated by him in 1904. It also incorporated the company of J.

Twyman continued to act as managing director until 1952 and thereafter remained as scientific advisor to the company. He was by this time elected as a Fellow of the Royal Society. Following his death in 1959, Hilger & Watts continued to trade until it was eventually acquired by Taylor, Taylor and Hobson in 1968. Hilger's catalogue of 1920's includes three different "high quality Spherometers" with various prices including a morocco case. Jason Clarke Antiques are happy to discuss carriage, condition or for any other queries, alternatively, you can also message us and we will endeavour to come back to you as soon as possible.