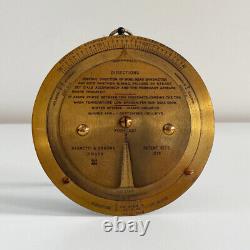 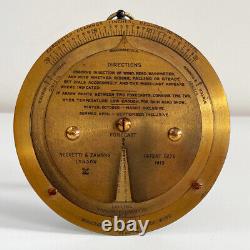 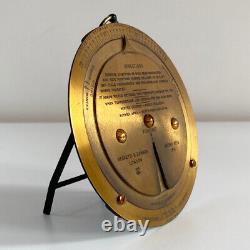 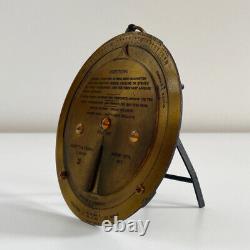 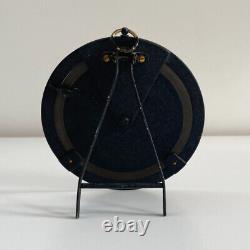 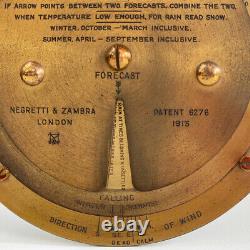 For sale, an early Twentieth Century brass desk weather forecaster by Negretti & Zambra. Comprised of three concentric engraved brass rings with instructions for use on the central plate, the weather forecaster provided for the first time an easy means for accurately predicting the weather.

The direction of the wind is first set on the outer ring, noting whether it is rising falling or steady and then the central pointer is used to mark the current barometer reading. The setting of these two positions will then reveal a weather reading in the cut-out section on the central plate. Negretti & Zambra's patent weather forecaster was a revelation in its time, the helpful yet somewhat confusing set of barometer weather indications produced by Admiral Fitzroy some years earlier had helped to domesticate the barometer into the family home but unless some knowledge and regular discipline in reading the instrument was exerted, the barometer was only ever a current reading of barometric pressure. With this simple yet highly effective tool, the weather could be forecast with a good deal of accuracy in seconds and was highly sought after, given the number of pocket weather forecasters that remain on the market. These brass desk versions were altogether grander and more accurate versions of the pocket version and for those interested in meteorology, remain just as useful as they did one hundred and three years ago.

Negretti & Zambra were a leading name in the production of meteorological and scientific instruments and have a company history dating back to 1850. Throughout their long and esteemed history they exhibited at British industrial fairs throughout and became makers to both Queen Victoria and Edward VII. Owing to changes in the business, the firm ceased the public retailing of scientific instruments sometime around the late 1960's and continued with a focus on the aviation industry in numerous guises until its eventual liquidation in the year 2000. A sad end to a hundred and fifty years of quality manufacturing. Jason Clarke Antiques are happy to discuss carriage, condition or for any other queries, alternatively, you can also message us and we will endeavour to come back to you as soon as possible.