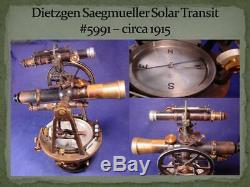 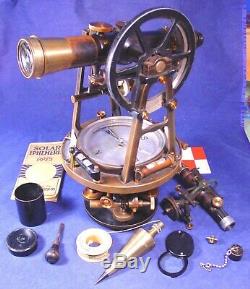 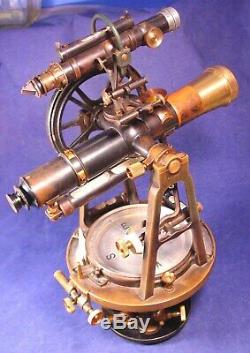 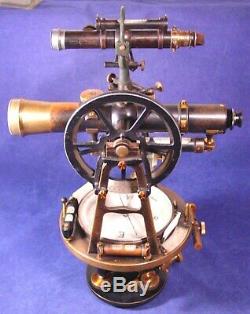 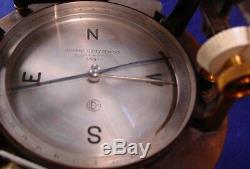 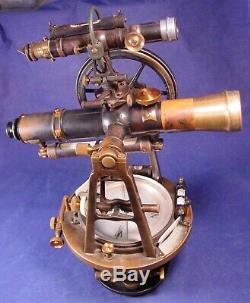 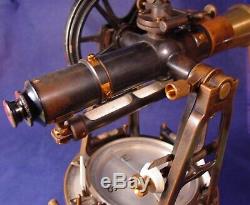 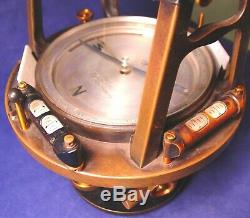 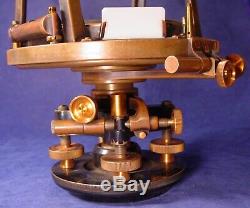 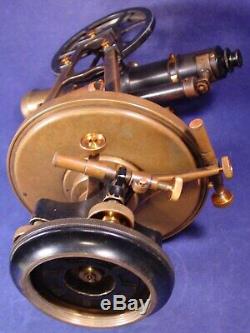 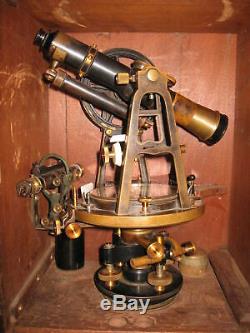 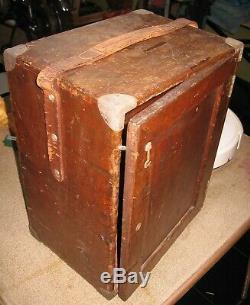 Nice example of an early Dietzgen Saegmueller Solar transit, the original blue finish and paint on both the transit and attachment are in great shape. The optics and 3 wire cross hairs are fine, the motions turn smoothly, and it has the addition of desirable accessory a gradienter on the vertical slow motion tangent screw.

It comes with the original box and has a neat attachment method for securing the solar attachment in the box. Only negatives I can see is there is a hairline crack in the objective lens that does not seem to affect the optics, and one of the little black balls on the vernier guards is missing, a black bead the same size could replace it.

Here is some information on the history of this transit. It was used in northern Wisconsin by the Lake Superior District Power Company to map out the Montreal River in Iron County Wisconsin and to build the Gile Flowage Dam and the 2 Hydro. Dams & Power Plant downstream. One of the first surveyors for the power company to use the transit was Walter Lindstrom, he was superseded by Clarence Lawrenson, then beginning about 1960 by Ray Richter who I got the transit from. Lake Superior District Power Company to Northern States Power and the new company disbanded the surveying and drafting departments. Here is some information on the firm of Dietzgen. Eugene Dietzgen was born in Uckerrath, Germany on May 6, 1862, he died in Chicago on December 1, 1929. Eugene was the eldest son of. A German tanner-turned-Communist who read Marx and joined the Revolution of 1848, which got him exiled from Germany. At age two Eugene was taken by his father to Tsarist Russia.

Where he was educated in the Russian language. And in his father's trade, tannery.

In 1881, Eugene's father sent him to America to escape the Kaiser. And to hide some of his father's socialist literature; the literature had already landed Joseph in jail a few years before. Eugene was only 19 years old when he arrived in New York City. He began work with a German drafting company, and eventually moved to Chicago.

In Chicago Dietzgen started the Eugene Dietzgen Drafting Company, the company was founded on November 13, 1885 under the name of Luhring & Dietzgen. This partnership was succeeded by Eugene Deitzgen & Co.

Of Delaware was incorporated in Delaware on October 29, 1917. By 1906, Dietzgen had two manufacturing plants. The company was noted for its production of slide rules.

Which Dietzgen started in 1898 after acquiring a patent from John Givan Davis Mack. Dietzgen was heavily influenced by his father, one of Karl Marx.

Provided his factory workers with many amenities not often found in the 19th century. These included separate bathrooms for men and women, open windowsills with flowers decorating the air, and a general atmosphere of a healthy working community. Dietzgen's first wife could not bear him children; they divorced, and in 1912 Eugene moved to Zurich, Switzerland.

There he met his second wife, Jansen, and they had three boys and three girls. The company still exists, and its second building remains as a part of DePaul University.

At the corner of Fullerton Avenue and Sheffield, in Chicago's once heavily German neighborhood of Lincoln Park. The original building still stands at 218 East 23rd Street, Chicago, operates today as Dietzgen Corporation, a privately held company.

Chronology of the Dietzgen company. 1885 German immigrant Eugene Dietzgen founds his own engineering supply house as both a dealership and manufacturers representative in Chicago, Illinois.

Retaining the Dietzgen name, this new division brings a new customer focus and paper converting expertise to the business. 2004 Nashua acquires the Magellan line of media to position Dietzgen as a full-service provider to the growing large-format graphics market.

The item "Circa 1915 Dietzgen Saegmueller Solar Transit +Xtras Wisconsin Power Co. History" is in sale since Friday, June 7, 2019. This item is in the category "Collectibles\Science & Medicine (1930-Now)\Engineering\Surveying Equipment". The seller is "klony" and is located in Kalispell, Montana. This item can be shipped worldwide.