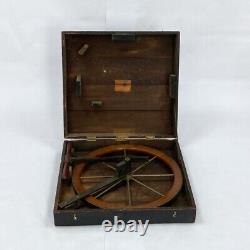 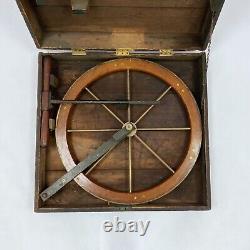 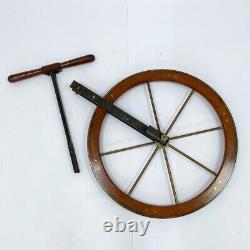 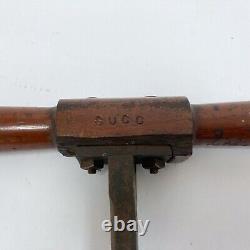 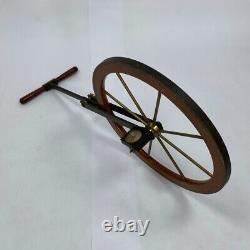 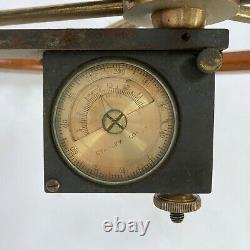 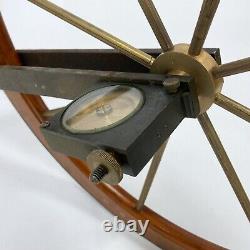 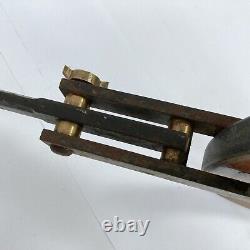 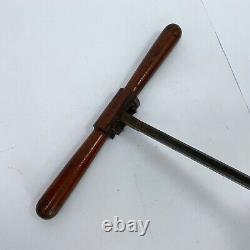 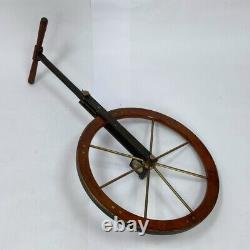 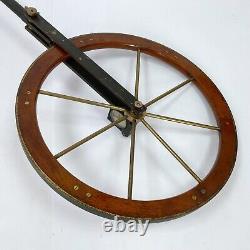 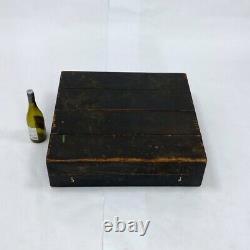 For sale, a Victorian surveyor's waywiser in original pine packing case by Stanley and marked to the Grand Union Canal Company. This super example is comprised of a brass bound mahogany wheel with brass spokes. It is affixed to a two-part black painted iron shaft clamped by a heavy brass wingnut to allow for the shaft to be removed for storage, and culminates in a turned mahogany handle.

At the base of the shaft is attached a brass case containing cogs that are activated by means of a screw shaft emanating from the centre of the wheel and a glass fronted dial for measuring distance in yards, furlongs and miles. It is further engraved to the maker, "Stanley, London".

The odometer (also variously known as a sureyor's wheel, a waywiser and perambulator) was used prolifically by surveyors and mapmakers throughout the 18th and 19th centuries. One was certainly used by Major James Rennell (Surveyor General to the Honorable East India Company) during his surveying of Bengal. He is noted in "The Cyclopedia; or Universal Dictionary of Arts, Sciences & Literature" in 1819 as saying that, he measured a meridian line of three degrees with this instrument; and found it to agree minutely with the observations of latitude. An Allowance however, was made for the irregularities of the ground whenever they occurred. Their history of course is much longer than that.

It is supposed that Archimedes was the inventor of the odometer and it was further developed by Vitruvius. In the seventeenth century, waywisers were put to use in John Ogliby's surveying of the British Isles, an older style model can often be seen pictured in the cartouches present on his maps. These simple instruments is still used to this day and they were certainly in great demand during the second half of the 19th century. Casella describes his perambulators as. An instrument of great utility for measuring the distance of places from each other, the length of roads etc.

It consists of a large wheel of known circumference, having its axis attached to a frame and handle; a system of wheels connected with the axis of the large wheel registers the number of its revolutions upon a dial in English measure, or it may be divided to any foreign measure if required. It is of further interest to note that Casella had three types of perambulator on offer in 1860, the plain offering with mahogany wheel, the same with a metal bound wheel for hot climates and one with a metallic wheel which was supposedly of an East India Company design and expressly for use in India and tropical climates. This example is highly unusual in that it retains its original pine packing case and that the handle is also impressed with the letters, "GUCC" the acronym for The Grand Union Canal Company.

This historic canal company was formed in 1929 from the amalgamation of the Regents Canal Company and the Grand Junction Canal Company which eventually formed a three hundred mile long waterway which stretched from London to Birmingham and Leicester. The route's legacy stretches back to the Late Eighteenth Century, but this created one navigable route under singular ownership and was intended to revive competition between the ever improving British rail system. It was eventually taken over by the Ministry of War in 1942 and by the British Transport Commission in 1949 as part of the Attlee Governments nationalisation programme. Commonly confused with the famous American toolmaking company, Stanley of London was actually formed by William Ford Robinson Stanley (WF Stanley). Born in Islington in 1829, Stanley was a gifted architect, inventor and engineer who by 1843 was enrolled at the London Mechanics Institution where he took classes in technical drawing, phrenology and engineering until he was forced to leave in order to support his father's building business at the age of fourteen.

His father's ventures ultimately failed but Stanley having gained numerous practical skills and acting upon his father's complaints about the quality of British technical drawing instruments, began to make and market his own in 1854. His immediate success allowed him to open premises at 3-4 Great Turnstile and another at 286 High Holborn and by 1862 he had won a prize medal at the International Exhibition for a straight line dividing machine of his invention. Using his skills as an architect, Stanley designed and built his own factory in Belgrave Road which he named The Stanley Works and by the 1880's the company employed 80 staff and were advertising over 3000 products for which they were of course most famed for their vast array of drawing instruments. The company was floated in 1900 becoming William Ford Stanley & Co Limited but the founder largely retired in the same year from active participation, only remaining as Managing Director and Chairman of the Board until his death in 1909 at the age of 81.

Under Stanley's stewardship, the company had won no less than 26 of the highest medal awards at exhibitions across the globe, testament to his huge inventiveness and business acumen. The company continued to prosper after Stanley's death and although their factories were requisitioned in both world wars, it continued trading until 1999 where, through lack of investment and loss of governmental orders, it finally went into liquidation. Today its importance to British industry is sadly overshadowed by confusion with its American tool manufacturing namesake and the raft of reproduction items produced by a company that uses its name. The founder WF Stanley was simply put, a powerhouse of a man and his obituary below goes someway in providing some detail on his extraordinary life both as a businessman and philanthropist. Mr William Ford Stanley dies at South Norwood on Saturday at the age of eighty one.

He was the founder and for fifty years head of the firm of scientific instrument makers bearing his name, and was the patentee of inventions that have world-wide use. He was a Fellow of the Royal Astronomical Society and the Meteorological Society and was the author of "The Nebular theory in Relation to Stellar, Solar, Planetary, Cometary and Geological Phenomena", "A Political Utopia", some tect books on surveying instruments and drawing instruments and other works. On many occasions he read papers before The British Association and other learned bodies.

He was created an honorary Freeman of Croydon in 1907. Jason Clarke Antiques are happy to discuss carriage, condition or for any other queries, alternatively, you can also message us and we will endeavour to come back to you as soon as possible. This item is in the category "Antiques\Science/Medicine\Scientific Instruments". The seller is "jason750_1" and is located in this country: GB.