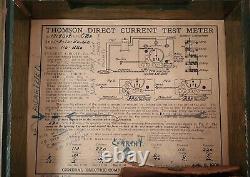 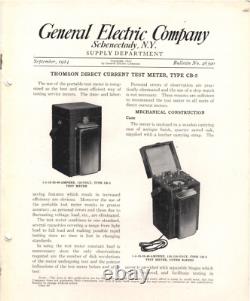 This incredibly rare instrument is a portable Thomson Direct Current Meter model CB-3. I believe it was used to measure the current drawn by the load on a DC power supply, and test the watt meters (such as were actually installed) at customer locations nearby the world's first commercial power station at 255-7 Pearl St. Manhattan NY between 1890 and about 1915. If you've watched the movie "The Current Wars" you'll be aware that Edison was an adherent to DC power generation (yep pun intended)... And hence this meter would have been made and used during the period between 1890 to 1915, after which point the DC supplies began being replace by AC services.

The Edison Electric Light Company, developed the first steam-powered electric power station on Pearl Street in New York City. Consisted of several generators and initially powered around 3,000 lamps for 59 customers. And operated at a single voltage.

Since the direct current power could not be easily transformed to the higher voltages necessary to minimise power loss during transmission, the possible distance between the generators and load was limited to around half-a-mile (800 m). Elihu Thomson develops a chemical meter similar to Edison's except it used zinc sulphate bath which worked much better. Edison's companies immediately started using Thomson's meter as they were desperate to solve the problem of metering.

1880s Elihu Thomson builds one of the first reliable wattmeters. He used solid silver bars and brushes with an aluminum disk with a small motor. Once again everyone including Edison used Thomson's meter as a standard. 1890s Elihu Thomson continues to improve electric meters.

Thomson has been working with AC power since the 1870s and has more experience in the area than most people around at the time. I believe Elihu Thomson is the same person that designed this meter, which seems to have been used until 1909 see date stamp on cct.