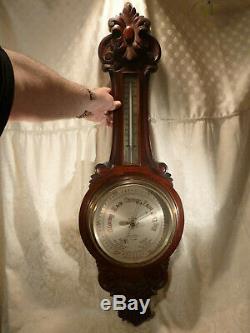 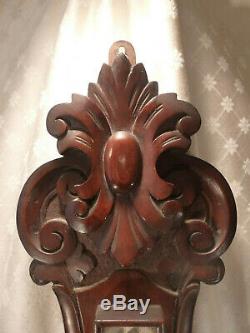 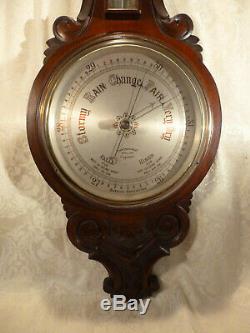 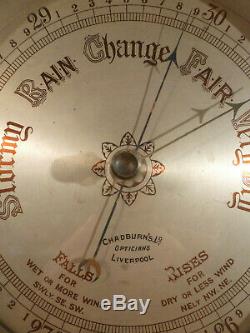 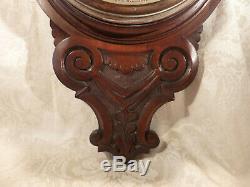 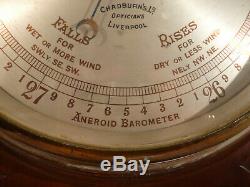 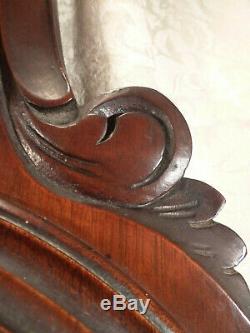 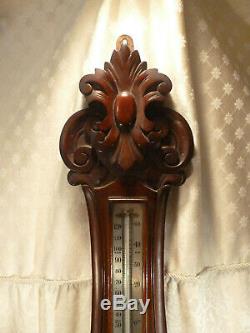 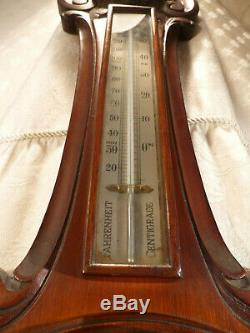 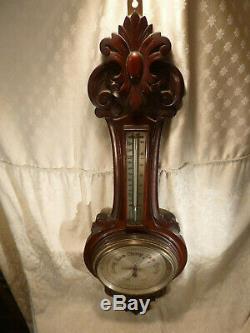 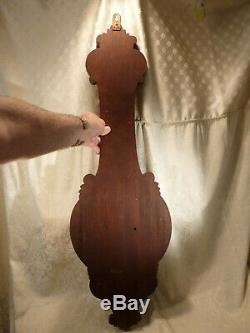 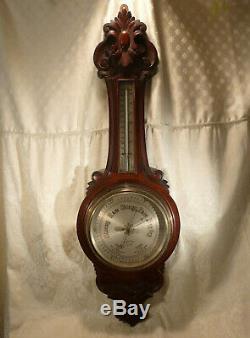 Antique Victorian Mahogany Banjo Barometer & Thermometer Chadburn's Ltd Opticians Liverpool and Sheffield. By Appointment to His Royal Highness Prince Albert, The Great Exhibition and The White Star Line and The Titanic. Beautiful Quality Antique Solid Mahogany Ornately Carved Wood Cased Aneroid Barometer and Thermometer marked on the face Chadburn's Ltd Opticians Liverpool - a top firm Opticians by Appointment to His Majesty Prince Albert and Exhibitors at the Great Exhibition of 1851 and later involved telegraph equipment for the White Star line and The Titantic too (for more fascinating information about the company see below) dating to pre 1898 when the company was renamed - in working order the barometer has been pressure tested but like all barometers will need setting to local conditions on arrival - the thermometer is also working and interestingly calibrated with Blood Temperature! With glass face and metal frame to both - the metal is unpolished and there are a few marks and dirt around the glass, generally the piece is in good condition with only light scuffs and marks - it comes with a heavy duty brass plate hook to hang it by on the back - please check photos which form part of the description and do help - truly gorgeous quality Barometer with great history - don't miss it!

Chadburns Brothers of Sheffield and Liverpool optical, mathematical and philosophical instrument makers are widely recorded as a top 19th century company - from 1818 a partnership William Chadburn and David Wright, by 1838 the business seems to have been bequeathed to the brothers Alfred & Francis Wright Chadburn, (the latters middle name presumably a dedication to David Wright from his business partner) and in 1841 a third and more renowned brother, Charles Henry had joined the company which was now renamed as Chadburn Brothers. Based at The Albion Works, Nursery Street in Sheffield, Charles Henry Chadburn relocated to Liverpool to open a new branch at 71 Lord Street. The Brothers gained honourable mention for their exhibits at The Great Exhibition of 1851 and were granted a Royal Warrant by Prince Albert around this period. Graces Guide to British Industry records them.

The Crystal Palace in London was built expressly for the purpose of housing the exhibits. Another interesting reference relates to Jules Vernes book The Journey to the Center of the Earth - it seems that when the text (then titled Journey to the Interior of the Earth) was being translated into English in 1877, the translator had a quibble with the author Jules Verne's use of instrumentation.

So naturally, the translator turned to the premier authority of the day on scientific instrumentation: In M. Verne's book a'manometer' is the instrument used of which very little is known. In a complete list of philosophical instruments the translator cannot find the name, as he is assured by a first-rate instrument maker, Chadburn of Liverpool, that an aneroid can be constructed to measure any depth, he has thought it best to furnish the adventurous professor with this more familiar instrument.

The'manometer' is generally known as a pressure gauge. Chadburn Brothers continued to exist until 1894 and was at that point being run by a Mr WT Morgan who was a nephew of the former owners. Charles Henry Chadburn was also retired by this point but had continued to trade in Liverpool until 1861 as a branch of the Sheffield company. It seems that in 1875 on his retirement William took over and by then they had expanded to Fenchurch Street in London and it is likely that they were also trading in Glasgow and Newcastle as is evidenced on Chadburn & Sons advertising from the late 1870s and early 1880s.

William Chadburns greatest stroke of luck was his association with Thomas Ismay, founder of the White Star Line to whom he lived in close proximity. This association led to Chadburn & Sons commissions for numerous ocean liners including the ill-fated RMS Titanic for which engine room telegraphs and steam whistles were manufactured.

We will be happy to quote for couriers too. Please check with your country? The item "Antique Chadburn's Ltd Optician Liverpool Mahogany Aneroid Barometer Thermometer" is in sale since Tuesday, October 8, 2019.