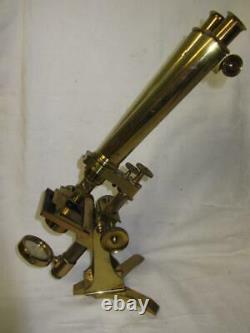 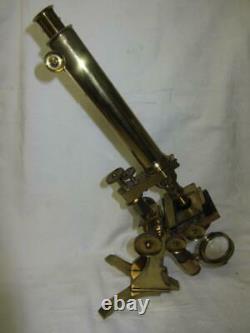 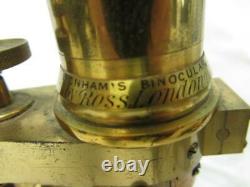 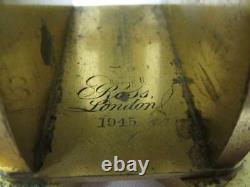 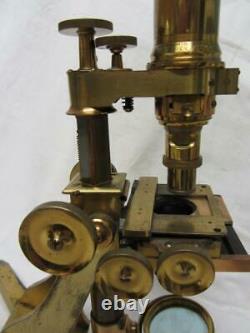 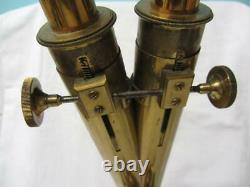 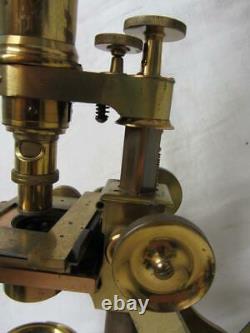 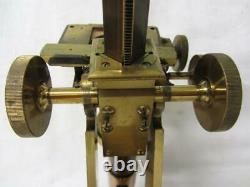 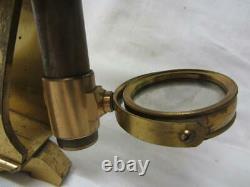 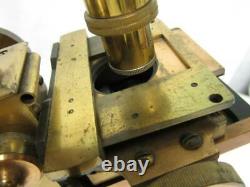 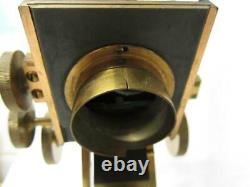 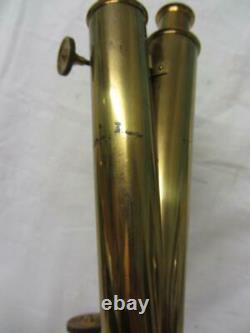 Antique ANDREW ROSS Brass Wenham Binocular Compound Microscope Circa 1850. Engraved around the tube "Wenham`s Binocular by Ross" Engraved on the base in lovely script "Ross London 1945". This has come straight from an estate sale and as such, no attempt has been made to clean it, therefore there will be marks/wear to the brass. Binocular Microscope Stand with two "B" eye-pieces, coarse and fine adjustments for focusing, mechanical stage having 1-inch of rectangular motion. Rotating slide platform for full positioning of the slide.

All work freely, mechanical sub-stage designed for holding illuminating and polarizing apparatus. The plane and concave mirror comes to you in very good condition. The objective is a Swift & Son London 2/3 N.

A 0.28 which comes to you in excellent condition. Retracted height is approximately 20.

If you require any specific photographs, message me. Andrew Ross (17981859) was a well known and respected optician and instrument maker in London during the first quarter of the 19th Century. He began his career in 1813 by apprenticing to John Corless. In 1830 he separated from Corless and started his own business, much of the time in partnership with Joseph J. His company Andrew Ross & Co. Made a number of optical instruments including telescopes, however, he became well known for the quality of his achromatic lenses and high-quality microscopes. Ross introduced a number of improvements to compound microscopes, especially due to his collaboration with J. Lister in creating achromatic objectives. Ross' last instrument won first place at the Great Exibition of 1851.

In 1841 he received a silver medal from the Society for his invention of the spherometer. He separated from Lister c1842 and moved to 21 Featherstone Buildings, Holborn. Ross was a founding member of the Microscopical Society of London, which later became the Royal Microscopical Society.

Ross made microscopes from 1831 through 1859, after which the company became Ross & Co. Under the direction of his son Thomas. Thomas' company continued making lenses under the "Ross" name until it merged with Barnet Ensign in 1948. In 1975 the company finally lost the "Ross" name when it was absorbed by first Avimo then eventually Thales Optics.

We strive very hard to offer a fast and efficient service at all times. After all, a happy customer is potentially a returning customer. We will send you a combined invoice when you are finished purchasing. However if you need more information on an item please request more specific details or photographs.