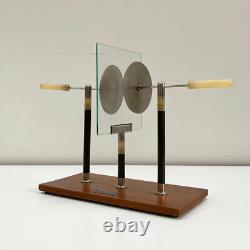 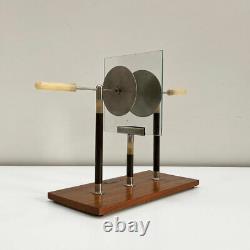 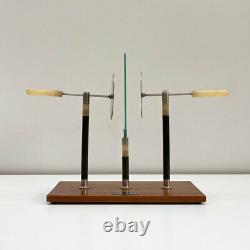 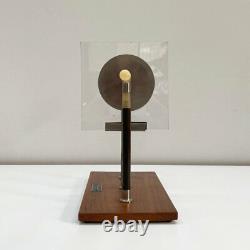 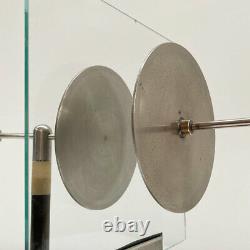 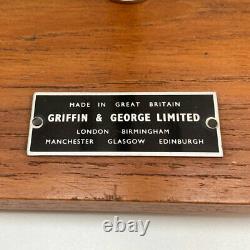 For sale, an Early Twentieth Century Aepinus Condenser or capacitor by Griffin & George Ltd. Comprised of three Bakelite and rubber insulated pillars attached to a wooden rectangular base.

A nickel plated metal cap with a horizontal hole drilled through the centre is provided on each of the two outermost pillars through which two adjustable rods are inserted. The end of each rod has a 4 inch diameter circular plate facing the centre and each have an insulated rubber handle at the outer end.

These rods are designed to enable hand adjustment forwards and backwards from the centre. The shorter pillar at the centre of the base is of similar design except for a nickel plated rectangular slip which holds a six and a half inch square sheet of glass and can be swapped with alternative dielectric or non-conductive materials. This apparatus albeit a very much later example was the result of experiments by Franz Aepinus during the Eighteenth Century which showed the relative resistance between conductors and non-conductors. The use of various materials intersected between the two metal plate conductors effectively debunked Benjamin Franklin's earlier theory that electricity was stored within the glass of a Leyden jar. Aepinus's air condenser was the birth of the capacitor which remains in widespread use today.

John J Griffin was an early supplier of chemistry apparatus but was also an accomplished chemist, publishing numerous books on the subject which helped to bring it to wider public attention. Shortly after, Griffin moved from Glasgow to London and by 1841 was renowned enough to be involved in the formation of The Chemical Society (now The Royal Society of Chemistry) and in 1851 was an exhibitor at The Great Exhibition. This growing success led to him to relinquish his interests in the family publishing firm and the proceeding two decades became his most prolific in terms of output, the company's voluminous trade catalogue of 1866 is insightful in its sheer size and breadth of products.

Griffin died in 1877 but his sons continued to successfully manage the business under the new title of John J Griffin & Sons into the early part of the Twentieth Century. It maintained its ties with Scotland throughout and in 1925, the company merged with the Glasgow arm of Baird & Tatlock to become Griffin and Tatlock until 1929 where it merged again with the firms W&J George & Becker and Stanley Belcher & Mason to finally become Griffin & George Limited. It survived until the end of the Twentieth Century in that form supplying scientific teaching apparatus. Jason Clarke Antiques are happy to discuss carriage, condition or for any other queries, alternatively, you can also message us and we will endeavour to come back to you as soon as possible. This item is in the category "Antiques\Science/Medicine\Scientific Instruments".