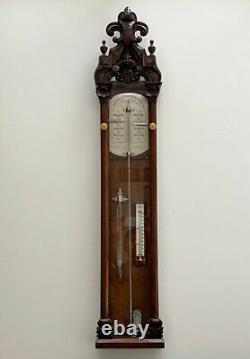 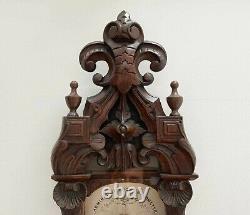 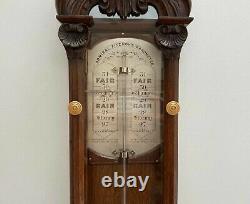 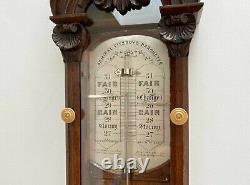 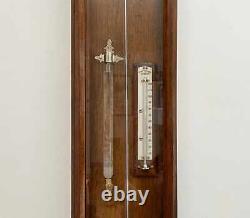 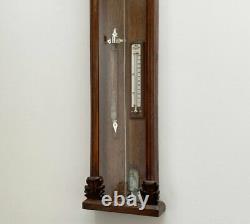 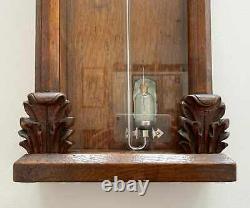 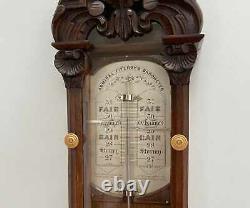 For sale, a very unsual and ornate Admiral Fitzroy barometer with silvered scale plate by Negretti & Zambra of London. This fine example is comprised of an oak case with a very detailed, carved pediment, oak turned finials and scallop shaped capitals with two further carved acanthus leaves decorating the base. The glazed centre section is devoid of the paper label encountered on most of these Victorian examples but has a simple and refined oak backboard containing a storm glass to the left with Gothic style fasteners and a Negretti & Zambra porcelain scaled thermometer to the right. The central mercury tube elevates to a large silvered scale plate measuring 27 to 31 inches of barometric pressure either side to allow for the same day and previous day recordings to be taken with the two separate ratcheted brass pointers operated by set knobs on the front of the instrument. Fitzroy weather indications are included at the base and the scale is crowned with the words, Admiral Fitzroys Barometer with floral swags below.

Negretti & Zambra were a leading name in the production of meteorological and scientific instruments and had a company history dating back to 1850 although their parents were amongst those Italian emigres that bolstered the British meteorological instrument making industry at the turn of the century. Throughout their long and esteemed history they exhibited at British and international industrial fairs and became makers to both Queen Victoria and Edward VII. Owing to changes in the business, the firm ceased the public retailing of scientific instruments sometime around the late 1960s and continued with a focus on the aviation industry in numerous guises until its eventual liquidation in the year 2000. They are today perhaps the most collected of the scientific instrument firms which bears testament to the quality of their work.

Jason Clarke Antiques are happy to discuss carriage, condition or for any other queries, alternatively, you can also message me and I will endeavour to come back to you as soon as possible. I have a number of beautiful antiques for sale, so please feel free to browse my other items. The item "ADMIRAL FITZROY BAROMETER WITH SILVERED SCALE BY NEGRETTI & ZAMBRA LONDON" is in sale since Wednesday, September 23, 2020. This item is in the category "Antiques\Science/Medicine\Scientific Instruments". The seller is "jason750_1" and is located in newbury, Berkshire.