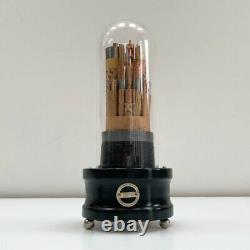 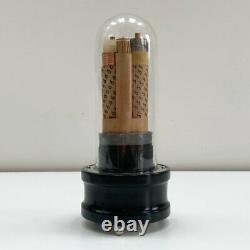 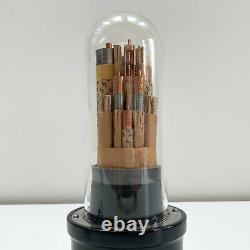 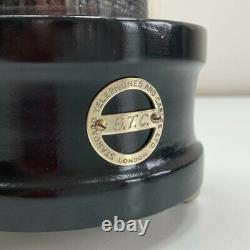 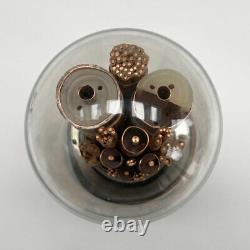 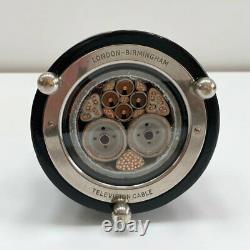 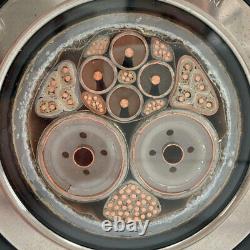 For sale, a fascinating and rare presentation cable section for the 1949 London to Birmingham television cable by Standard Telephones & Cables Limited. The cable length is set within a black painted circular wooden base on three ball feet, into which a section of the cable is inserted. The cable is held in place at the bottom by means of a glass plate and metal flange which allows the flat end of the cable to be examined.

The flange is engraved with, London Birmingham Television Cable. At the top side of the base, the cable protrudes up a further sixteen and a half centimetres which enabled it to be cut away and graduated into sections thus revealing all of the numerous component parts for more detailed examination. All of the cables are paper wrapped and numbered with the sections then paper wrapped together and finished in a steel tube and tape.

The cable has been well protected by a glass dome which like the base is fixed in place by a metal flange screwed into the top. It is completed with the logo badge to the front for the cable manufacturers, Standard Telephones & Cables Limited, London. The laying of this cable was a famously major undertaking and came some short years after the original television service was set up in London at Alexandra Palace in 1936.

With the requirement to extend broadcasting across the UK, Birmigham was chosen as the second broadcasting hub and both a cable connection and a radio connection were established and finally opened on the 17. An interesting period BBC documentary made in the 1950s called, How television came to The Midlands shows in detail just how large a task this was at the time. In much the same way as their Victorian predecessors presented sections of telegraph cable to worthy individuals, Standard Telephones & Cables were understandably proud of their involvement and smaller paperweight versions were known to have been gifted at the time. This example though is altogether a different piece standing at 26cms in height and 12cms in diameter, it is most likely to have been a presentation to an executive within the company or someone of similar standing involved in the project.

Standard Telephones & Cables Limited began life in 1883 as International Western Electric, a subsidiary of the US firm Western electric. The First World War did nothing to hamper the companys success given their specialism in communications and following the War became one of a consortium of companys that set up the BBC (British Broadcasting Corporation) in 1922. It continued to be a major actor in the telephony industry and with the onset of World War Two, provided support to the military throughout this period.

Television had of course began public broadcasting just before the War and the company was evidently involved in its continual development from its association with the BBC. STC was also heavily involved in the subsequent spread of television broadcasting across the UK which began with the London to Birmigham connection mentioned above in 1949. Their cables were used in most other subsequent geographical developments throughout the 1950s. During the latter part of the century, STC continued to lead developments in light transmission for voice and data but the science was generally too far ahead of the materials available to realise these experimental processes. Their eventual decline came due to poor investment in the mainframe market of the 1980s and from loss of business due to the privatisation of British Telecom.

They were eventually bought out in 1991 by Nortel after which the name disappeared. This fantastic presenation piece is not only a delight to look at, moreover it captures a historic moment in the development of early British Television broadcasting. Jason Clarke Antiques are happy to discuss carriage, condition or for any other queries, alternatively, you can also message us and we will endeavour to come back to you as soon as possible. The item "1949 LONDON TO BIRMINGHAM TELEVISION CABLE PRESENTATION DISPLAY BY STC LIMITED" is in sale since Tuesday, September 21, 2021. This item is in the category "Antiques\Science/Medicine\Scientific Instruments". The seller is "jason750_1" and is located in newbury, Berkshire. This item can be shipped worldwide.