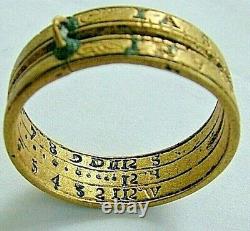 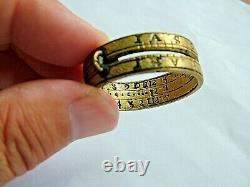 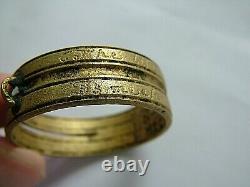 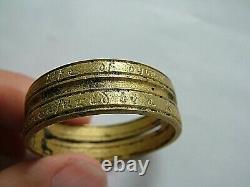 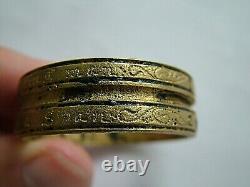 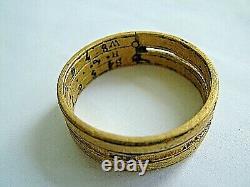 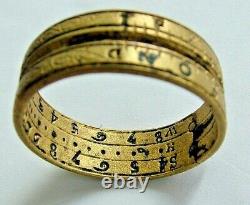 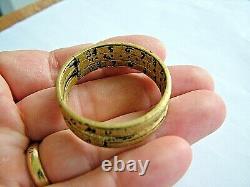 This is a rare 16th or 17th copper alloy poke ring or portable sundial with a an engraved inscription "The Life of dying man / Is measured by a Span". It measures 39mms in diameter and is in excavated condition, the following is from the Portable Antiquities Scheme Record from when this ring was discovered in Cornwall. A copper alloy pocket sundial consisting of a circular band with a slit in the middle around half the circumference, inscribed around the outside of the band which is not split, in two lines, one above the other, in cursive script that has been dot-punched. Beyond these two inscriptions, the band is then split and has two more inscriptions one above the slit and one below, in capital letters'I F M A M I' above'I A S O N D' inverted.

The letters must stand for the months of the year, so January to June in the first group and July to December in the second, with the'J' being represented here by an'I'. The slit is marked on the outside with incised ruled gradations 2.5.

The dots and the gradations would permit fractions of an hour to be read when the dial was consulted, aligned to the sun according to the date read from the outer side. The letters W, H and S at the ends of the numerals refer to Winter, Hours, and Summer.

The sundial has a drawn wire D-shaped suspension loop on one side which would have had a chain attached to it and to a band or'nodus'. The nodus would have run along the central groove and was completed by a washer-like ring and it was the spot of sunlight passing through this ring on to the inside of the dial which was used to indicate the time (John Davis pers comm). Other examples still have a short chain attached to the loop see Bailey, Detector Finds 2, 1993, p. Also illustrates a similar pocket sundial with the letters of the month on the exterior, and a similar set of three lines of numbers in the interior, on page 9, no. 2, which is dated from the 16th to the 17th century.

The condition of this item is very good, with little corrosion, probably because it was found in sand and not soil. The method of manufacture of these'poke' or pocket dials is from cut hammered sheet with dot-punched or burin-engraved inscriptions. There are around ninety of these on the database. They tend to be 17th or 18th century in date but the better-made ones with mottoes (only about 10%) like this example can be late 16th century in date (John Davis pers comm). The item "17thC Copper Alloy Poke Ring or Portable Ring Sundial Engraved" is in sale since Monday, September 28, 2020. This item is in the category "Antiques\Science/Medicine\Scientific Instruments". The seller is "fanny-fluttermuck" and is located in Penzance. This item can be shipped to North, South, or Latin America, all countries in Europe, all countries in continental Asia, Australia.